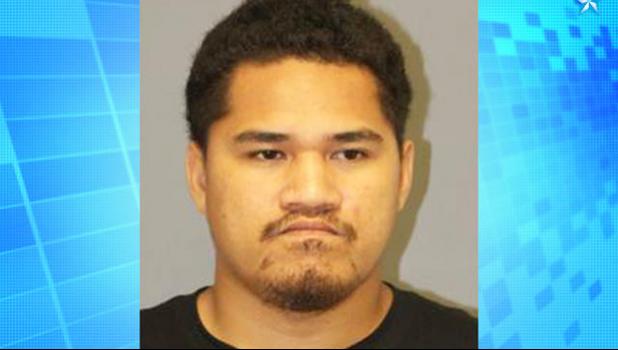 A 22-year-old Kalihi Valley man allegedly punched and kicked his pregnant wife after she asked him for money to buy food for their 2-year-old son.

Si Ufaga Moana, also known as Siufaga Moana, was charged Wednesday with abuse of a family or household member in the presence of a child younger than 14 years old. Moana’s bail was set at $30,000.

The attack occurred at about 9:30 p.m. on June 9 when the victim, 21, was about 33 weeks pregnant with their second child. Police said the woman arrived at their Kalaunu Street apartment and found Moana drinking alcohol.

The victim said when she asked him for money to buy food for their child, Moana became angry, punched her in the face several times, and bit her left ear in front of their young son, according to a court document. Police said the woman went unconscious during the attack.

When she regained consciousness she ran out of their apartment to seek help, but Moana ran after her and punched her in the nose, causing her to fall to the ground, the court document said. “He started pulling my hair and punched my nose again then kicked my lower left abdomen area,” until his mother intervened and stopped him, said the victim in a written statement to police.

Police arrived at the hospital after they received a report of the abuse. The victim also told police Moana had been abusing in the two years since their son was born. She noted he had previously been arrested for abusing her, and at some point she had fled to American Samoa to get away from him. When she returned to Hawaii in May, the abuse started again.