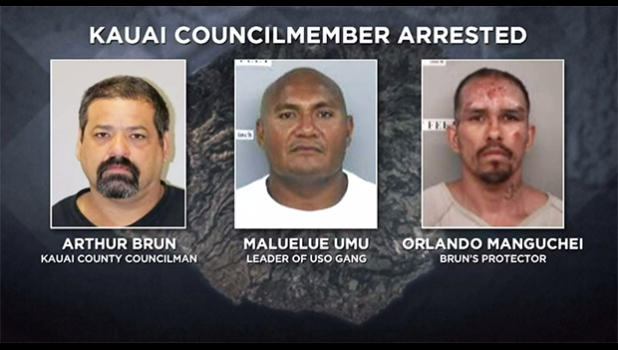 Kauai, HAWAII — A Samoan man in Hawai’i, described by federal prosecutors, as a leader of a Samoan gang both inside and outside of the prison system in the Aloha State was among 11 individuals arrested and charged late last week in connection with a high-profile case where the alleged ring-leader of a drug operation is an elected member of the Kauai County Council on the island of Kauai.

A federal indictment alleges that Council member, Arthur Brun, aka Ata, along with Maluelue Umu, aka Malu, and the other co-defendants conspired to distribute methamphetamine. The indictment also charges substantive drug trafficking offenses, an assault on a federal law enforcement officer, witness tampering, evidence tampering, and firearm offenses.

Federal and state officials announced the charges in a news conference last Friday morning in Kauai, while the defendants were arraigned in the afternoon at the federal court in Honolulu. The defendants entered not guilty pleas and court hearings are set in the coming days on bail issues.

Prosecutors allege that Brun ran this drug trafficking conspiracy while, at the same time, serving as an elected member of the Kauai County Council. One of Brun’s suppliers of methamphetamine was Umu, who was a “shot caller,” or leader, of the United Samoan Organization (or USO), a gang that operates both inside and outside of the Hawai’i prison system.

The 29-page indictment, handed down Feb. 13th, was the result of a joint federal, Hawai’i state and Kauai county law enforcement investigation which started last year.

Brun and Umu are among the defendants that federal prosecutors have asked the court to hold without bail. To support the argument, prosecutors filed separate motions.

For Umu, who is charged with two-drug related offenses, prosecutors with the US Justice Department claim in its motion that the 50-year old defendant used his leadership position in the USO gang “to threaten violence when it served his criminal interests.”

Additionally, the charges in the indictment against Umu relate to his role in providing pound quantities of methamphetamine to a months-long, multi-defendant drug trafficking organization that pumped dangerous drugs into the community on Kauai.”

The indictment cites the two incidents in which Umu supplied meth for Brun. The first occurred Oct. 12, 2019 with 16 ounces or 453 grams of methamphetamine. One of the co-defendant, Kelvin Kauwila Kai, tells Brun in a telephone call that the meth supplied by Umu was "killa... the best one so far,” the indictment alleges.

The second time Umu supplied meth — weighing approximately one pound and two ounces — for Brun was around Oct. 29, 2019. It was after getting this supply that Brun fled from Kauai police to avoid a traffic stop while throwing out the window of his car, the meth, which was recovered by police.

In addition to all other evidence, “the government anticipates that multiple witnesses would testify about Umu’s drug trafficking activities and leadership in the USO gang at any trial,” prosecutors said in court filings.

“Although Umu does have family and community ties, his history and characteristics on the whole weigh strongly in favor of detention,” prosecutors further argued.

Prosecutors further argued that Umu’s leadership position in the USO gang is a characteristic that weighs strongly in favor of his detention.

“Umu poses a number of dangers to the community. Most obviously, there is a serious danger that he would continue to distribute drugs while on pretrial release,” prosecutors said.

“What is more, there is a danger that Umu would continue in his leadership role with the USO gang, and indeed, would use that position — if on pretrial release — to retaliate against perceived cooperating sources and witnesses,” they further argued.

The indictment spells out in detail the government’s investigation, which includes wire-tapping and other forms of electronic surveillance with court-authorized warrants.