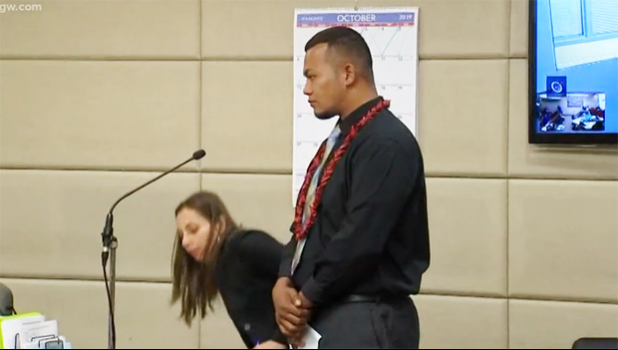 PORTLAND, Ore. (AP) — A right-wing extremist who rose to prominence for fighting in Portland during political protests and fled the Pacific Northwest after being indicted on felony assault charges has pleaded not guilty.

He was arrested Friday at Portland International Airport. Supervisory deputy U.S. marshal in Oregon Eric Wahlstrom, says authorities had information Toese was flying into Portland from American Samoa and arrested him when his flight landed. Wahlstrom says his arrest wasn’t a previously planned surrender.

The Oregonian/OregonLive reports he was released from jail after posting bail Saturday.

Toese reportedly returned to his hometown in American Samoa after a Multnomah County grand jury indicted him and Proud Boy Donovan Flippo on assault charges in February.

The two were accused of beating a man during a June 2018 confrontation in Portland.

After Toese was arrested Friday night, he posted bail and on Monday, he entered a not-guilty plea.

As he left the courtroom, KGW8 reporter Tim Gordon asked him if he had anything to say to the man he's accused of beating.

"God bless everybody," he said. "I'm a proud western chauvinist and I refuse to apologize for creating the modern world."

Toese's victim, Timothy Ledwith said he hopes the prosecution of Toese goes by quickly and added this:

"I do think the Proud Boys are a hate group, by the way," he said. "I agree with the Southern Poverty Law Center."

Flippo, Toese's co-defendant, previously reached a deal, agreeing to plead guilty to fourth-degree assault. He was sentenced to eight days in jail, two years of probation, 40 hours of community service and a $100 fine.