Would you support the Fono revisiting American Samoa drug laws in relation to marijuana (THC) and CBD?
Yes to both marijuana and CBD
69%
No to both
15%
Yes to marijuana, No to CBD
7%
Yes to CBD, No to marijuana
8%
Total votes: 533
Home 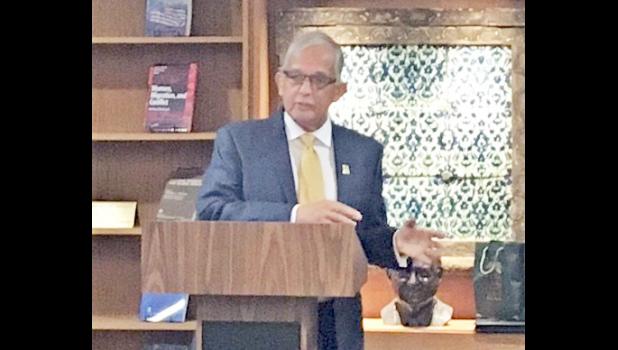 University of Guam President Robert Underwood recently spoke at the Peter Tali Coleman Lecture of Pacific Public Policy at the Center for Australian, New Zealand, and Pacific Studies and the Asian Studies Program at Georgetown University.

Underwood’s lecture, “The Changing American Lake in the Middle of the Pacific," was given on Nov. 16, according to a UOG news release.

Underwood shared his thoughts on the history and current developments in Guam, Micronesia, and the Pacific, the news release stated. He called on islanders and the United States to seek out and fully define how they should view their future relationship, according to the news release.

Before the lecture, Underwood presented a 2017 Distinguished Alumni Award to Amata Coleman Radewagen, the American Samoa delegate to Congress. Radewagen was elected in 2014 — the first woman elected to the U.S. House of Representatives from American Samoa, the news release stated.

The lecture series is named after Radewagen’s father. It honors the legacy of Peter Tali Coleman, the first person of Samoan descent to be appointed governor of American Samoa, the news release stated. He later became the territory's first popularly elected governor. Coleman earned his law degree from Georgetown University.

Among those in attendance was former U.S. Ambassador Peter R. Rosenblatt, who in 1977 was nominated by then-President Jimmy Carter to negotiate on the political status of the Trust Territory of the Pacific Islands.

Read an excerpt from the speech at Pacific Daily News