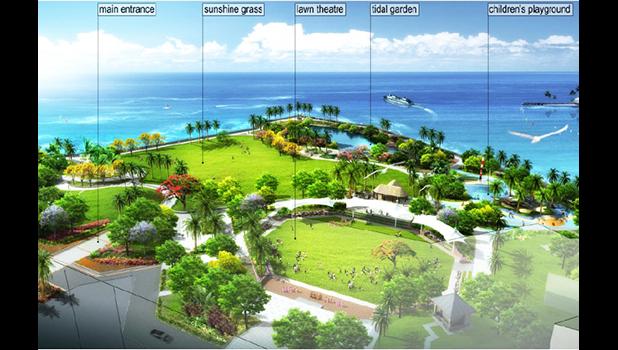 Apia, SAMOA — Based on the Memorandum of Understanding on Friendly Cooperation between City of Huizhou, the People's Republic of China and the Independent State of Samoa co-signed by Mayor Mai Jiaomeng of Huizhou and Honourable Prime Minister Tuilaepa Lupesoliai Sailele Malielegaoi of Samoa in 2015, Huizhou Municipal People's Government decided to construct the China-Samoa Friendship Park and Arts and Culture Centre in Apia with grant aid from Huizhou city, Guangdong Province, China.

The site of Arts and Culture Centre locates in Malifa of Apia.The site covers a land area of 9,224 ㎡, and the total floor area is 4,375 ㎡. The main contents of construction include culture, heritage and arts area, area for performing arts and orchestra, art shop, cultural exhibition area, library and restaurant.

The site for the Friendship Park is at the Eleele Fou, the area behind the Government Building and the Central Bank of Samoa Building, up to the inside boundary of the existing seawall to the north.  The Friendship Park will be the central park in Apia providing a range of activities and facilities for locals and visitors and to gather to watch cultural shows, play sports, and basically to enjoy a well-designed open park.

An outdoor performance space will be located just behind the Government Building, to be designed as an open lawn theatre with covered seating around the open lawn area, ideal for small cultural performances.  The existing lagoon will be improved into a tidal garden with boardwalks, viewing platforms and informational signs.  Other key components of the park include an open sports field, new volley ball court, a small café, children’s playground and service buildings.  The Friendship Park will further activate this area on the waterfront.  The Huizhou and Samoan design teams are currently finalizing construction drawings for the Friendship Park, with construction estimated to start in August this year for 18 months to two years. Huizhou Municipality is developing the Friendship Park in accordance with Samoa’s Waterfront Plan 2017-2026 that was launched in December 2016.

Huizhou is a city in southeast Guangdong Province, China and has about 4.6 million inhabitants. From 2016,  Huizhou Municipal People’s government has donated 23 sets of electronic teaching platforms and 3 computer rooms to Samoan colleges and provided fund assistance to  more than 2,000 students from 60 primary schools and colleges through Guangdong (Huizhou) Friendship Scholarship. Huizhou Municipal People’s government has also donated medical equipment which is worth 3.2 million tala to local hospitals.