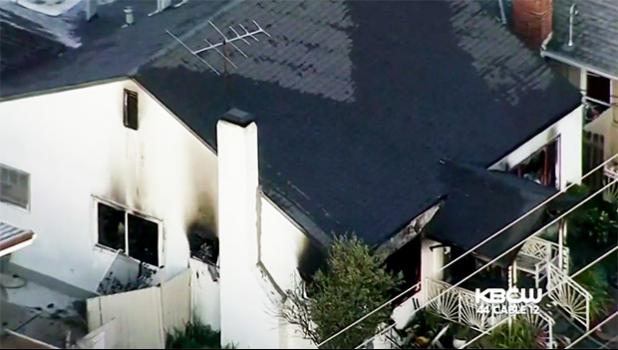 SAN MATEO (CBS SF) — A suspect has been arrested in East Palo Alto in connection with an early morning gang-related arson that left an 85-year-old grandmother dead, authorities said.

“She’d sometimes come by here and get some lemons,” said Mardoqueo Perez.

He said the sirens from the trucks woke him up last Tuesday. When he looked outside he saw Susana Tonga’s home across the street on Humboldt on fire.

Firefighters said four people were able to get out before smoke filled the home, but it took them several minutes to realize and tell them their grandmother was still inside.

“So they went back into the burning house and found the 85-year-old grandmother, Susana Tonga, in there unresponsive,” said San Mateo Police Officer Michael Hobsh.

Perez and Tonga’s next door neighbor, Magaly Baldivia, watched as firefighters performed CPR on Tonga, but it was too late. She died on scene, according to investigators.

Hobsh said they worked around the clock on tracking down Tonga’s suspected killer once they realized the fire was an arson, including collecting home surveillance footage from neighbors. They said they found an accelerator on the front porch.

“Surveillance footage of the vehicle fleeing the scene led detectives to a home in east Palo Alto,” said Haobsh.

Three days after the fire, detectives arrested Fifita Tau. They served several search warrants on the home he was found in, as well as several cars. Tau is being held without bail at the San Mateo County Jail on murder charges.