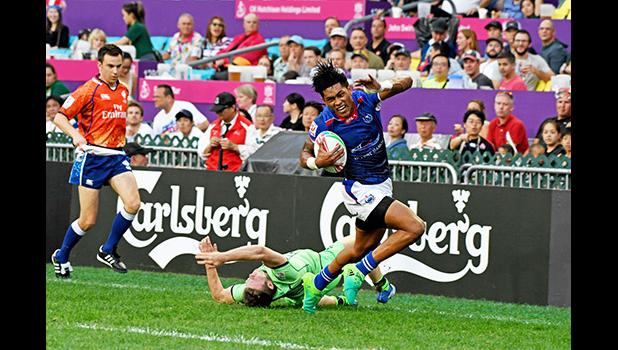 After a dismal couple of seasons, Samoa is now a regular contender in tournament quarterfinals, having placed 4th last weekend in Hong Kong, following the high of second place in Las Vegas.

Sixth in the standings prior to this weekend's Singapore Sevens, Sir Gordon said his players had come to understand the level of fitness that's required of them.

"What it's been I think is the consistency around our conditioning. We've worked particularly hard," he said. Sir Gordon Tietjens said the Wellington Sevens was a well run tournament but the city had been like a 'ghost town'. [Photo: AFP]

Experience has also helped to lift Samoa up the standings, Sir Gordon said.

"For a lot of the new, younger players that have been new to World Series rugby, they're into their second season," he said.

Samoa have also learned to lift themselves against stronger teams but will have to perform consistently against all opposition this weekend in Singapore, the coach said.

"We seem to get up for the bigger games, whether we win or whether we lose them we seem to go in with a really good attitude," he said.

"It's the so called lesser names that don't have the profile of the top four teams. They're the ones we have to start nailing consistently."

Samoa have been drawn in Pool D in Singapore alongside New Zealand, Japan and Spain.