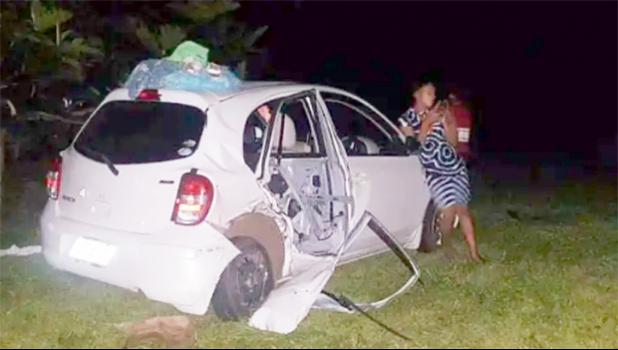 Apia, SAMOA — A Fasitoo-uta youth who got drunk and took his family car for a joy ride didn’t get far before he crashed into another vehicle, driven by an unlicensed driver.

The youth, in his 20s, escaped with minor injuries despite his vehicle ending upside down from the force of the crash, just down the road from his home.

Speaking to Samoa Global News his mother says she is angry, frustrated and very disappointed but at the same time, grateful that he was ok.

According to police from the District Depot at Faleolo who responded to the incident, the black SUV driven by the youth collided with a white sedan carrying a family from Manono

Police say one driver was under the influence of alcohol while the other driver did not have a driver’s license.

Both drivers and passengers of did not have any serious injuries according to police.

The white sedan is said to have been a gift for Christmas sent to the family from children overseas.