A decade after the tsunami: A story of loss, grief and healing 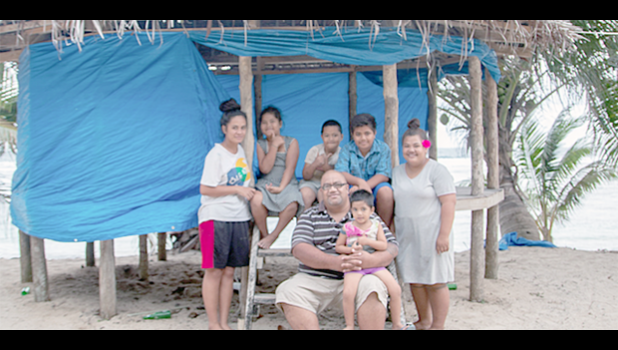 Saleapaga, SAMOA — The morning of the tsunami, Perelini Ulugia was halfway through shaving his face, when the earth shook the walls of the fale around him.

“I thought maybe one of my brothers in law was playing a joke on me, shaking the house,” he said. It wasn’t until he stepped out that he realised there was an earthquake.

Mr. Ulugia woke up his family. They turned on the radios, listened closely for news. The announcer confirmed what they had felt: an 8.1 earthquake had struck off the coast of Samoa.

“At that time, I didn’t think of the sea, you know, they had just mentioned the earthquake.

“Then we saw these big rocks coming down from the mountains, so we were all looking up the top.

“One of my sisters in law, she was on the other side of the road and she saw the wave and yelled back to us.”

Like so many others, faced with a wall of black water, Mr. Ulugia froze. He couldn’t see his youngest children, two-year-old Jay Jay and seventh month old Mary Lyne and didn’t know what to do.

“I thought I was dreaming. But reality kicked in when my wife’s family began running inland.”

He started to make for safety but in just 15 steps, the wave caught him and carried him through the bushes, slamming him against the ground. He remembers wondering: “is this really happening? Is this real?”

In the chaos, Mr. Ulugia’s nephew had grabbed Jay Jay and run west, and his wife ran with their daughter to the east. But the wave was too strong for them both and robbed both children they desperately tried to save.

Mr. Ulugia’s wife sat with him, sipping on koko Samoa while he recounted his experience but preferred not to be interviewed. She struggles to talk about the tsunami, still.

When the water finally cleared the next day and the searching could begin in earnest, the survivors of the village formed a line from the water to the hills and began to walk, slowly, eyes pinned to the ground.

“They found my son first.

“We were searching around, and then they called me. They said they found a kid, and I just felt empty.”

Mr. Ulugia keeps his hand on his heart while he tells this story. He pauses sometimes but seems determined to share what happened.

The village of Saleapaga will gather on Sunday to eat and share memories and remember the day their lives changed forever. On the 29th of September 2009, they lost 33 people to the tsunami, at least six per cent of the village (according to 2006 census figures).