China promising more than delivering in Pacific, US official says 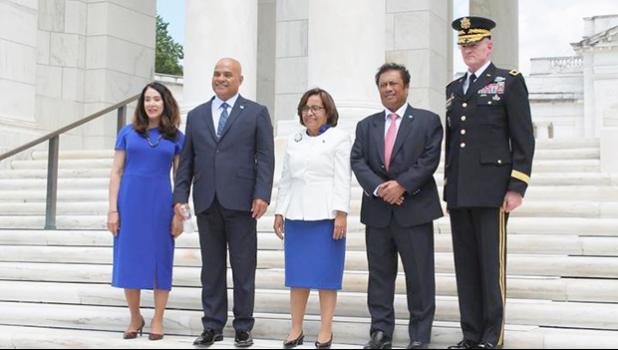 Washington, D.C. — Much of China's planned investment in the Pacific region is unlikely to eventuate, a top US official says, downplaying regional security fears ahead of an historic meeting between President Trump and Pacific counterparts.

The official, who spoke on condition of anonymity during a conference call with reporters, said many of China's investment projects would instead remain "at the drawing board" but did not elaborate on the claim.

Analysts have said China promises more than it spends in the Pacific, especially in comparison to aid put up by Western countries.

According to the latest available figures from Australian thinktank the Lowy Institute, China committed more than $US184 million in the Pacific during 2018, but spent just $US46 million across 12 projects.

The talks - due to start at 2pm Eastern Time - are instead expected to focus on security, including illegal and unreported fishing, transnational crime, and climate change.

The US official added that combating China's rise was not a core part of the country's Indo-Pacific strategy, which was focused on development and not "countering any particular nation".

However, in an opinion piece published last week in The Hill, Mr Remengesau suggested the same strategy was a direct counter to China's expansionism and militarisation in the Western Pacific.

He said Palau and other US Freely Associated States were "natural allies" in this plan, which also aimed to prepare for the possibility of war with China if tensions continue to escalate.

"Palau has already begun to identify its strategic needs in discussions with representatives of the U.S. Navy and Coast Guard," Mr Remengesau said.

During the conference call on Tuesday, one official said Mr Trump was taking an "unprecedented interest" in the Pacific.

They said the US had a longstanding interest in the region but that Mr Trump's administration had renewed this with frequent visits, including Vice President Mike Pence's presence at November's APEC summit in Papua New Guinea.

Another official, who noted the high uptake of US military service by people in the Freely Associated States, said the government was working on ways to expand veteran support and benefits.