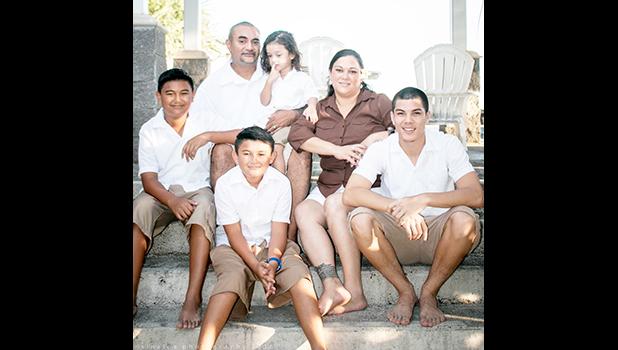 “Be content with what you have, but be hungry for more”
By
Blue Chen-Fruean
blue@samoanews.com

Long before Faafetaiileali’i Raison donned his cap and gown last year and walked across the stage to receive his diploma as part of Samoana High School’s Class of 2016, he already knew what he wanted to be: a sailor in the United States Navy.

Growing up in a family with a long history of US military servicemen and women, some would say that Tai (as he is known to family and friends) was destined to be a military man.

The 18-year-old is the son of Melvin and Josephine Raison Ae of Pago Pago. He enlisted into the US Navy on April 14, 2016 and completed basic training at the Naval Recruit Training Command in Great Lakes, Illinois. Currently, Tai works in the Executive/Administrative Department handling paperwork for the PCU Portland LPD 27 at Pascagoula Naval Station in Mississippi.

According to Tai, he checked into his first and current command on April 17, 2017 - PCU Portland LPD 27. “Once Commissioned into the Navy, the ship will become the USS PORTLAND LPD 27. The ship I am currently attached to is an Amphibious Assault Transport Dock/Landing Platform Dock. We serve as transport for Marine Corps troops to and from destinations,” he said.

According to The Portland, Tai joined the Navy in October 2016 and reported to PCU Portland in mid-April “excelling in his job very well! Bravo Zulu! Keep up the great work!”

Tai was born in American Samoa, but spent most of his life in Texas, where he was raised by his grandparents Louise and Timoteo Seigafo, a US Navy retiree.

He moved back to the territory when he was a freshman.

“First and foremost, I would like to thank the Lord for blessing us with the ability to see another day and live a life of joy, and….after you are through reading this, be blessed with knowing that God is our Lord and Savior, and that there is none like Him,” Tai wrote.

He quoted Jeremiah 29:11 – “For I know the plans I have for you,” declares the Lord, “plans to prosper you and not to harm you, plans to give you hope and a future.”

“Those who know me well enough know that I do not talk about it often, so this is probably the most I’ll ever talk about myself or my personal life,” Tai wrote in a testimony sent to Samoa News. “My experience so far in the Navy has been filled with gaining new knowledge and the want to succeed.”

He said he took the ASVAB test during his junior year of high school at Samoana and afterwards, “I was unsure of whether I wanted to go to college or join the military and serve.”

Tai described his experience in basic training as “pretty good,” as he was fortunate to go through it with two other Samoans: Christian Novera and Jaymon Ofisa.

“Although the adjustment to a new lifestyle was a challenge, especially with all the expectations that come with being a part of the world’s greatest Navy, I’ve never been pushed any harder nor have I been mentally strengthened like I was in boot camp,” he reminisced.

On the 25th of this month, Tai will officially have been in the Navy for 8 months. In August, he will be ranking up to E2 (Seaman Apprentice).

“I have 3 years and 4 months to go before I make the decision of staying in or moving on to another chapter in life,” he said. “For the past 7 months, I have learned a lot about the Navy as well as what it means to serve in the United States of America. Being awarded as our command’s Sailor of the Week is just another example of the endless blessings that our Heavenly Father has blessed me with.”

He continued, “Humbleness, humility, patience, and faith are the four main things that will keep you afloat in life. I thank my grandparents for instilling these core traits into my life as I become older. This might sound a little contradictive, you have to be content with what you have but be hungry for more by simply using what you’ve got to help yourself and others become better people is what truly builds character.”

Tai said the military is the best thing that’s happened to him. “So many options to choose from while serving, so many benefits and things you can earn along the way. It isn’t about the job that you choose but how you choose to handle the ups and downs that come with it.”

Because of his light skin, those who don’t know Tai would never guess that he is Samoan. “Although I am afakasi, the way I conduct myself will show you otherwise. My skin may be fair but my actions will display that of a young man who was raised up with humility, the blood of Samoa runs through my veins and that, I will never deny. I carry with me the pride of being Samoan because our people, our culture, and our way of life are second to none.”

Tai said he lives by his grandmother’s words: To read the Bible and pray every day, and not forget to go the church and return all the glory to God, thanking Him for His love for the both of them, enabling them to always see another day.

“Remember that in all you do, stay true to yourself and never be conformed by the ways of this world,” is Tai’s message to everyone.

His mother Josie told Samoa News over the weekend that they are all very proud of Tai. “He’s such a terrific kid, very humble, and always does what he is told.”

She added, “I’ve never had a problem with him. Because he is the oldest child, he was always my right hand, helping me raise his siblings.”

Tai’s parents and his three younger brothers will be moving off island next month, seeking medical treatment for the youngest of the Raison-Ae boys.

“I would like to make a massive shout out to my brothers and sisters in the armed forces stationed all over the world, as well as the veterans who have gone before us, ultimately paving the way for the people of America to live in freedom and wellness. Thank you for your service and your never-ending sacrifices to make this world a better place,” Tai concluded.

Congratulations Tai! Thank you for your service.