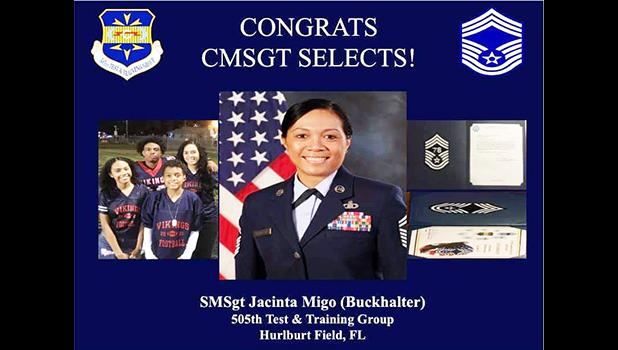 Sergeant Buckhalter was born in Pago Pago, American Samoa and entered the Air Force in October 1998. Her background is in Command and Control Battle Management Operations.

Currently she is the principal advisor to the Group Commander on all enlisted matters and informs the commander on issues affecting the health, morale, welfare, training and the proper utilization of over 500 assigned personnel.

The 505 TTG is responsible for initial and advanced training for Air Force, joint, and coalition personnel in the principles, processes, and systems used to command airpower at the operational-level of war, developing operational-to-tactical level tactics, techniques, and procedures supporting air, space, and cyber integration.

She has held many qualifications across her career field while training hundreds of personnel.  Her assignments include bases in Alaska, Florida, South Korea, Hawaii, Colorado and she has deployed in support of Operation Enduring Freedom. Prior to assuming her current position in July 2018, Sergeant Buckhalter served as the Superintendent, North American Aerospace Defense Command and United States Northern Command Current Operations Center, Peterson AFB, Colorado.

Samoa News congratulates Sergeant Buckhalter on her many achievements.