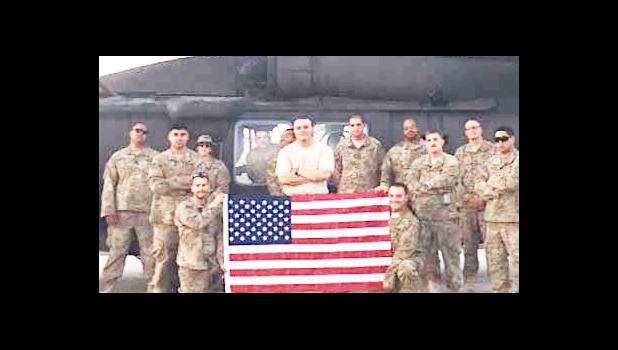 Captain Avegalio, a black hawk pilot, had recently returned from a deployment to the Middle East and now assumes his new command of an aviation unit comprised primarily of the Lakota helicopter.

Captain Jerrod Talavou Avegalio, is the son of Papalii Dr. Failautusi Avegalio and Linda Spear Avegalio of Leone. He is a graduate of Kahuku High School and former captain of the track and field team that won the 2003 State Championship where he also set the Hawaii State record in the discus that stands to this day.

That year he was named the Gatorade Track & Field Athlete of the Year for Hawaii. A scholar athlete, Avegalio is a graduate of the University of Hawaii, Shidler College of Business Administration and UH ROTC program with a bachelor's degree in management information systems. Raised on his grandfathers farm in Pavaiai - Talavou, as his family calls him - is a beekeeper and raises a variety of ginger flowers with his wife Shelly when he is not flying. His love of growing flowers comes from his late great aunt Ve’a Enesi of Leone.

His dream is to visit Ofu, Manu’a, where his grandfather descended from.