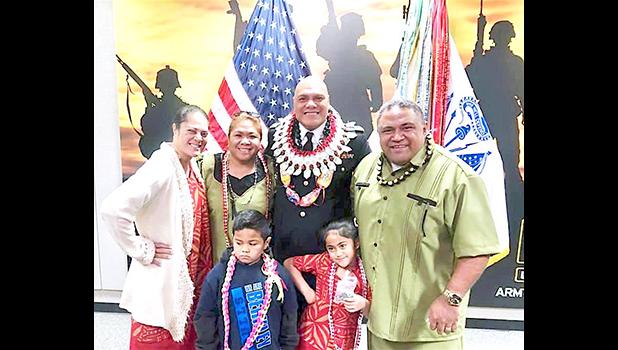 Chaplain (Major) Folauga Tupuola’s promotion ceremony was officiated by Colonel Benjamin Luper, who also gave the opening remarks and administered the Oath of Office. The invocation was delivered by Chaplain (Major) James Souza, while the benediction was offered by Rev. Ailao Malepeai Tofaeono of the CCCAS, Etena Fou-Las Vegas.

Chaplain (Major) Folauga Tupuola graduated with a Doctorate in Ministry from Claremont School of Theology in 2008. The following year, he received a Divine calling to serve soldiers in the U.S. Army. The Army waived his age before he headed to Chaplain Basic Officer Leader Course in Fort Jackson, South Carolina.

Immediately after he graduated, Chaplain Tupuola deployed with the 4th Battalion, 9th Infantry Regiment to Iraq for 11 months. Upon re-deployment, he was called to Hawaii where he served as chaplain for the 225th Aviation Battalion, and supported the 8th Special Troops Battalion.

After three years in Hawaii, Chaplain Tupuola relocated to Joint Base Lewis McChord, in Washington state where he served as chaplain for the 502nd Military Intelligence Battalion. In 2018, he was assigned to the 6th Recruiting Brigade in Las Vegas, Nevada where he now ministers.

A 1998 graduate of the Congregational Christian Church of American Samoa (CCCAS) Kanana Fou Theological Seminary, Chaplain Tupuola is married to Leilani Panama Tupuola, and they have been blessed with many children: Isaiah, Asora, Lanilua, and Tyarra Tupuola-Lauti, and grandson Deythan, to name a few.

Chaplain Tupuola loves to spend time with his family, especially his children; and he loves competitive sports, especially basketball. He is a prayer warrior and his motto comes from the words of Jesus Christ: “I come to serve and not to be served.” - Matthew 20:28.

Congratulations Chaplain Tupuola. Thank you for your service!