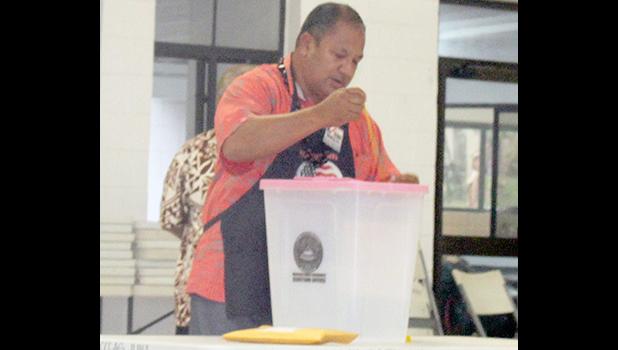 Pago Pago, AMERICAN SAMOA — Voters in American Samoa have spoken and have again rejected the veto over-ride referendum, which seeks to amend the local Constitution by giving the Legislature the authority to override the governor’s veto instead of the US Secretary of Interior as it stands now.

Electors were asked to vote “yes” or “no” on the referendum question: “Should Article II, Section 9 and 19 of the Revised Constitution of American Samoa be amended to give the Fono, rather than the Secretary of the U.S. Dept. of the Interior, the authority to override the Governor’s veto?”

Working with the Secretary of Samoan Affairs, the ASG Office of Political Status, Constitution and Federal Relations, had conducted outreach programs at all levels of the community explaining the current process as well as what the referendum was all about.

However, despite the awareness programs, which also included private schools, the referendum is again defeated.

If voters had passed the referendum, which was initiated by the Fono through an approved Senate Joint Resolution, the issue would have then been taken to the U.S. Congress, which has the final say when it comes to changes to the local Constitution.

Politicians and some government leaders at the time believed it was defeated due to the lack of public awareness and understanding of the issue.

It was next on the ballot in the 2010 general election, but as a part of more than a dozen proposed amendments to the Constitution approved in the 2010 Constitutional Convention.  All the proposed changes to the constitution were put under one question for a vote of “yes” or “no” on the ballot — and as a result the override amendment was rejected by voters, when the majority said, “No”.

Many said at the time that each amendment should have been presented individually, instead of under one umbrella question.

The veto override referendum was again on the 2012 election ballot, and again defeated. Of the total 13,031 ballots counted for the referendum vote, 7,177 voted “no” to reject while 5,854 voted “yes” in support.