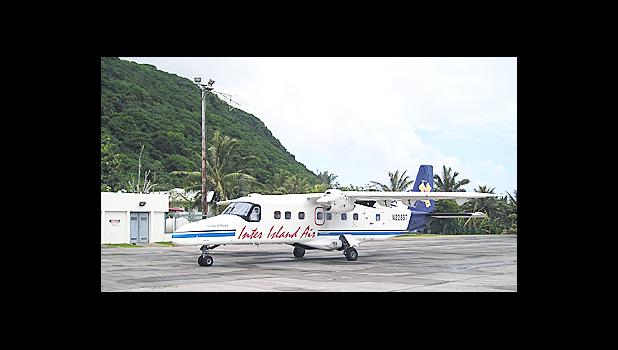 The US Department of Transportation has revoked “without prejudice” the authorization certificate for Inter Island Airways to operate “scheduled flights” after the locally based carrier has not conducted passenger service for three years.

However, USDOT has yet to clarify or elaborate further on whether Inter Island Air’s authority to operate “on demand” service is affected in the revocation order.

The airline had no comments at this time.

The revocation order of Inter Island Air’s ‘commuter air carrier authorization’, dated Apr. 18 and publicly released Apr. 20 on federal regulatory records, was signed by USDOT Office of Aviation Analysis director Todd M. Homan, who points out that it was in August 2007 that the federal agency found the airline fit to conduct commuter operations and the air carrier operated under its commuter authority until May 2014.

A provision of USDOT regulations provides that if an air carrier ceases conducting the operations for which it was found fit, willing, and able, its authority is automatically suspended as of the date those operations ceased, Homan explained.

The rule further states that said air carrier may neither re commence nor advertise such operations unless its fitness to do so has been re-determined by the USDOT within one year of its cessation or its authority shall be revoked for dormancy.

“Three years have elapsed since Inter Island has conducted scheduled passenger operations as a commuter air carrier and it has not requested the [USDOT] re-establish its fitness to recommence its commuter operations,” Homan said.

He also noted a Mar. 30 letter from USDOT official Lauralyn J. Remo, who notified Inter Island of USDOT’s intends to issue an order revoking its commuter air carrier authorization, for “reason of dormancy”.

Remo informed Inter Island that based “on our discussions with the Federal Aviation Administration, it appears that Inter Island... has not operate any aircraft in over three years” and therefore the carrier has ceased operations in accordance with provisions of USDOT regulations.

Among Samoa News questions to the USDOT public affairs office in Washington D.C. is clarification on what the revocation order means for Inter Island’s federal Part 135 certificate to continue to operate as an “on-demand” — charter — carrier.  Samoa News understands that the airline still has the Part 135 certification and inquiries with the FAA were referred to the USDOT public affairs office.

Responding to Samoa News questions, USDOT spokesperson Caitlin Harvey said that on background information pertaining to the revocation order, it is “for reason of dormancy.”

“In other words, Inter Island no longer holds authority to conduct scheduled passenger operations as a U.S. commuter air carrier,” Harvey said, adding that should the “company wish to operate as an air taxi” it will need to file with USDOT’s Office of the Secretary the “air taxi registration” form and “certificate of insurance” form.

Inter Island had operated flights on the inter Samoa route and Manu’a flights. However, without Inter Island or any other available US carrier, the Samoa government Polynesian Airlines, under 30-day cabotage waivers, had been serving American Samoa’s domestic flights.

Last week, the USDOT granted another 30-day waiver for Polynesian Air to operate Manu’a flights from Apr. 19 to May 18th.