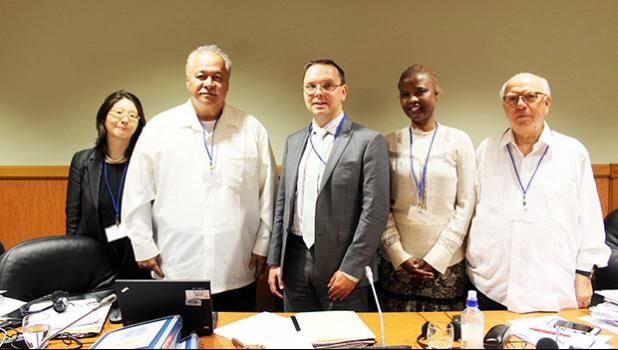 Tapaau: "Samoans will defend their family lands with their very lives"
By
Fili Sagapolutele
fili@samoanews.com

American Samoans prefer the compromise that limits enforcement of the United States Constitution’s equal protection clause to limit the risk to Samoan lands, according to Tapaau Dr. Daniel Aga, Executive Director of the ASG Office of Political Status, Constitution, and Federal Relations, during his presentation to the United Nations Decolonization Committee last month.

Tapaau made American Samoa’s perspective presentation on behalf of Gov. Lolo Matalasi Moliga, at the May 16-18 Decolonization Committee’s Caribbean Seminar hosted by St. Vincent and the Grenadines.

The presentation covered four specific issues, according to a revised copy of Tapaau’s written presentation posted recently by the Decolonization Committee on its website. (See Samoa News June 2 and 7 editions on reports covering the first two issues of the presentation.)

One issue covered in the presentation is the “Samoan Way of Life” in which Tapaau declared that “We are an indigenous people” and that “Today, we live a distinct way of life with democratic and egalitarian features unique in Polynesian societies. Our greatest hope is to pass on this way of life to future generations.”

He went on to point out provisions of the UN Declaration on the Rights of Indigenous Peoples Articles which states in part that – “Indigenous peoples have the right to self-determination… the collective right to live in freedom, peace, and security as distinct peoples and shall not be subjected to any act of genocide...and the right not to be subjected to forced assimilation or destruction of their culture.”

Tapaau also referred to the UN General Assembly Resolution 1541 that says  an integrated status must conform to calls for the integration to be "on the basis of complete equality" with "equal status and rights of citizenship..”

He asked, “Does the notion of complete equality in Resolution 1541 support and reconcile with the UN’s Declaration on the Rights of Indigenous Peoples? Or are there contradictory elements?"

He responded by saying that from the US perspective, the principles of equality and integration were codified in the US Constitution as the 14th Ammendment, that forbids states from denying “any person within its jurisdiction the equal protection of the laws.”

“If enforced vis-à-vis American Samoa’s political relationship with the US, the equal protection clause would pose an existential threat to the Samoans,” Tapaau pointed out. “We do understand how important it is to apply the US constitution in a manner that is just for all people.”

He told the audience that US history and government is taught in all schools in American Samoa; and in public awareness sessions, he said students were reminded of the self-evident truth “all men are created equal” written in the 1776 Declaration of Independence, and they were told about the 1860s Civil War that freed the slaves.

While American Samoa celebrates the national holiday for Rev. Martin Luther King, he posed the question, did students really understand the 1960’s civil rights movement against segregating public accommodations, education, and voting? Students were told of the societal ideal “Equal Justice Under Law” engraved on the front of the US Supreme Court building.

“The youth are taught to respect diversity, practice tolerance, and have empathetic reciprocity for all people and residents in American Samoa,” he said.  “Yet, we have self-evident truths of our own. They were not written down in books, but were passed down in oral traditions from generation to generation.”

“They tell us that these islands are our home and must be protected for the ones we love - even for those yet unborn. No one takes the land with him or her. We are merely stewards,” he added. “Ours is a compelling interest to preserve who we are as a distinct cultural community and to make fundamentally important decisions for ourselves.”

“Legally, American Samoa has a compelling interest in preserving lands of Samoa for Samoans. Put another way, the Samoans will defend their family lands with their very lives,” he said.

Tapaau noted that some have argued, there is little to worry about - that the laws already exist to protect our lands, even saying that losing our lands will never happen. But from the perspective of the people who have the most at risk and the most to lose, there is a great deal of historical evidence that says otherwise.

“The real danger is not equal protection itself. It’s the toxic mix of freemarket profiteering, artificially altered demographics, and legally sanctioned access that could set us down the slippery slope or deliver that fatal blow,” he noted. “We must exercise all the due diligence we can to prevent this from happening.”

“We understand our US constitutional rights are limited. But for now, we prefer the compromise  that limits enforcement of the US Constitution’s equal protection clause to limit the risk to Samoan lands,” he said.

This is not to say that Samoans haven’t integrated into the US in other ways.  For example, American Samoans carry US passports and do not require visas or permits to travel, reside, and work in the US.

He said American Samoans can become naturalized as US citizens with equal rights in the states. For example, federal data shows that in 2015, 296 US Nationals became naturalized US citizens.

Since 1951 with the first large-scale migration to the US, generations of Samoans have been born and raised as Samoan-Americans, he pointed out, adding that more than 180,000 people of Samoan descent live stateside.

“This is 3 times the population of American Samoa,” he said and noted that after the Native Hawaiians, Samoan-Americans are the second largest Pacific Islander group in the U.S - (based on the US 2010 Census story published in Samoa News.)

“Samoan communities or “urban villages” have been established along the West coast and across the nation. Strong family, church, and cultural connections are maintained between the islands and the states,” said Tapaau, whose presentation includes footnotes and reference as the source data. (Samoa News will report in a future edition on the final topic covered in Tapaau’s presentation.)