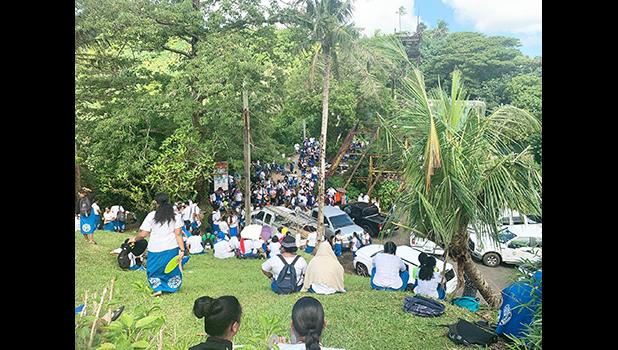 By
Samoa News staff
reporters@samoanews.com
Public still urged to continue evacuation from low lying areas until an All Clear is issued.

Pago Pago, AMERICAN SAMOA — The Pacific Tsunami Warning Center (PTWC) alert for American Samoa  issued around 8:40a.m. has been downgraded to an advisory.

The original warning was the result of a preliminary magnitude 8.0 earthquake in the Kermadec Islands region around 8:28a.m. today.

PTWC saID a hazardous tsunami may have been generated by this quake that would soon impact nearby coast. And monitoring is underway to evaluate the tsunami threat. It says that the first wave activity was scheduled to arrive around 10:19 a.m. in American Samoa today.

Based on all available data, PTWC says there could be a threat of hazardous tsunami waves impacting low-lying coastal areas in American Samoa.

Persons located in low-lying areas along coasts of all American Samoa should move immediately inland or to higher ground.

The public is advised not to return to evacuated areas until the all clear is given by local authorities.

Public still urged to continue evacuation from low lying areas until an All Clear is issued.

Okay it’s downgraded to an advisory but people don’t get yourselves hurt while trying to get to safety.