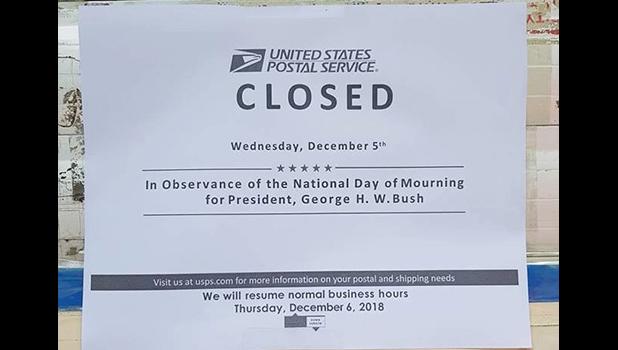 Pago Pago, AMERICAN SAMOA — Today, December 5, 2018, has been designated as a National Day of Mourning.

Beginning last Friday, Nov. 30th, pursuant to a proclamation of the United States, all flags in the territory are to be flown at half staff for 30 days as a sign of respect on the passing of the 41st US President, George Herbert Walker Bush.

“President Bush embodied the traits of leadership, integrity, grace, and dignity we should all hope to achieve,” said Governor Lolo Matalasi Moliga in a memo dated December 1st.

“His life of public service to his country began when he enlisted in the US Navy on his 18th birthday — just six months after Pearl Harbor — and continued as a naval aviator who flew 58 combat missions during world war II.

“After the war and after a successful career in the business world, George H. W. Bush retuned to a life of public service.  First as a member of Congress, then an as ambassador to the United Nations, Chief of the United States Liaison Office in China, Director of Central Intelligence, two terms as Vice President and finally, as President of the United States.  He guided our country through a peaceful end to the Civil war and in doing so, helped make the world a safer place,” Governor Lolo continued.

“Despite his many accomplishments, President Bush remained a humble man who believed the strength of our country lay in its people, not its leaders.  ‘America,' he famously said, 'was illuminated by a thousand points of light’.”

The governor concluded, “The people of American Samoa celebrate the life of George Herbert Walker Bush and ask the Lord to bless his family in this difficult time. May he rest in everlasting peace.”