Friday marks the 8th anniversary of the deadly 2009 tsunami 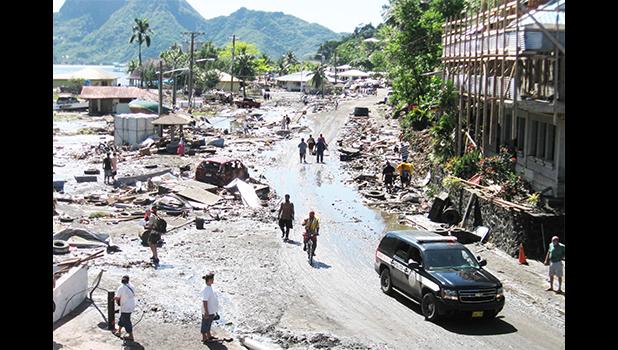 As American Samoa remembers the devastating tsunami of September 2009, Gov. Lolo Matalasi Moliga is urging the community “to reassess our plans” to respond quickly and effectively to future disasters including nuclear threats.

With towering waves, the tsunami killed 34 people in American Samoa (3 of whom were never found), three in Tonga and more than 100 in neighboring Samoa. (Samoa and Tonga, on the other side of the dateline, marked the tsunami anniversary yesterday, their Sept. 29.)

In his memorial message, the governor recalled the devastating tsunami, which “flattened parts of the territory and took away 34 lives”.

“While time has restored some level of tranquility and serenity to our injured hearts because of the unexpected and sudden termination of association with those so dear to us, our memories glow brighter and their images are solidly imprinted in our hearts,” the governor said. “So while they are not physically with you, their sprits continue for they are in us with constant reaffirmation of recurring moments typifying their lives with us.”

“I call upon all the people of American Samoa to remember those perished by the 2009 tsunami in your prayers,” he said.

He added that it’s “fitting for us to reassess our plans to respond quickly and effectively to disasters of this magnitude to avert having to suffer the same excruciating pain triggered by the loss of our loved ones.”

The governor is calling on the government, private sector, village community and religious organizations, to “revisit your disaster preparedness plans to response to nuclear threats and other natural disasters so we don’t encounter great suffering endured by our brothers and sisters in Puerto Rico, Texas, Louisiana, Florida, and the US Virgin Islands. Please remember them as well in our prayers.”

As of yesterday morning there was no confirmation of a government event to mark the tsunami anniversary, but Samoa News has learned that families of the 34 victims will be holding their own memorial services.

The Leone Empowerment Team is holding an informal private ceremony at the Leone Healing Garden — a monument to remember the village’s eleven residents who died in the tsunami — inviting the 11 families, and anyone who wants to join, to light a floating candle during a ceremony at 5:30p.m.— today.

“We take all 11 of them as family members. We have invited world famous swimmer Bruckner Chase to join us,” Leone Empowerment Team official Andra Samoa said yesterday afternoon.

Of the eleven Leone residents who lost their lives in the tsunami, two of them were children.

Tomorrow, the Rotary Club of Pago Pago and Hawaiian Airlines will host the annual Memorial Remembrance Service for the victims' immediate family members at the Tsunami Memorial Family Picnic Shelter at Lions Park in Tafuna. The program starts at 11:30a.m.