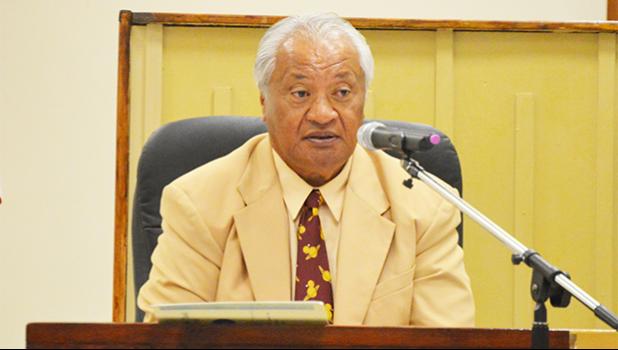 Says this is to keep the public & the media from learning of ‘sensitive’ bank issues
By
Ausage Fausia
ausage@samoanews.com

House Speaker Savali Talavou Ale has accepted a recommendation from the President and the Board of Directors of the Territorial Bank of American Samoa (TBAS), for a closed-door hearing with faipule today, to avoid the media reporting on some of the sensitive issues they are going to discuss, with regards to Bank operations.

Savali made the decision to accept the recommendation from TBAS, which was voiced by House Commerce & Economic Development committee chairman, Rep. Samuel Ioka A. Meleisea, after a long discussion amongst members of the House yesterday during their regular session,

Meleisea requested Savali and House members to accept the bank's request for a closed-door hearing, “due to the sensitivity of some of the issues that we’re going to discuss."

"We understand that the community wants to hear all about the bank's operations, but we also need to know that the Board and the new management are still working on some areas to upgrade their operation. With that being said, I believe a closed-door hearing is appropriate,” Meleisea said.

Rep. Sataua Dr. Mataese Samuelu and Rep. Kitara Vaiau supported the recommendation, with Sataua saying there must be a special reason why the bank is asking for a closed-door hearing with faipule. He agreed that there are sensitive issues that lawmakers need to know first, before releasing the information to the general public.

He said community members are still waiting for the bank to announce that a routing number is now available for them to use.

“I don’t support the recommendation for a closed hearing," he said. "I want the public to listen and review everything that is going to be discussed during the hearing. This chamber is for the public and they deserve to understand what’s going on at the bank right now,” Lavea added.

Vice Speaker, Rep. Fetui Fetu Jr., Rep. Vesi Talalelei Fautanu Jr., and Rep. Vailoata E. Amituana’i supported Lavea’s argument. Fetui believes the community has the right to know what is going on inside the Fono chamber. Representatives were each selected by their district, he said, and people from each district need to understand what's going on at TBAS.

Vesi stated that nothing can stop the community from listening to the hearing, but if the bank is asking for a closed-door hearing, he recommended that members of the committee meet with members of TBAS first at their main office, before setting up a date and time for a House hearing inside the chamber.

Vailoata believes the hearing must be open to the public and the media. He reminded his fellow faipule that the Fono passed the bill to establish the bank, as well as the money to jump-start its operations.

“A huge amount of money was given to set up the bank and its operations. I believe the community needs to understand the bank's operations, especially the issue of a routing number, which we’ve been waiting on for quite some time. This information needs to get out to the community,” Vailoata said.

Rep. Vaetasi Tuumolimoli Saena Moliga echoed Vesi’s statement about first setting up a meeting between members of the committee and TBAS, before conducting an open hearing with representatives at the house chamber later on.

Vaetasi said he believes there is sensitive information that needs to be protected from getting out to the public, things that have to do with the bank's operations.

He said the House needs to consider the recommendation for a closed-door hearing, and understands that TBAS is still trying to get their operation to a high level. He said if the bank reveals any information that can affect their operations in the future, it will defeat the whole purpose of trying to establish a bank to serve the people of American Samoa.

Savali thanked the faipule for their concerns and said the reason why each committee calls hearings, such as the one with TBAS, is because House members have a lot of questions that need to be answered.

He told lawmakers that if the bank does not want to reveal any information — because they know the information will affect their operations — then it would be a waste of time to call a hearing.

He told representatives that the bank is trying to protect itself, because there are things they are still working on to make it better for the people.

In the end, Savali made the decision to accept the recommendation from the bank for a closed-door hearing. He instructed the vice speaker and the Sergeant at Arms to make sure no one is allowed inside the chamber during the hearing, except faipule.

Savali warned the House Sergeant, "You will face consequences if something goes wrong" at the hearing today.