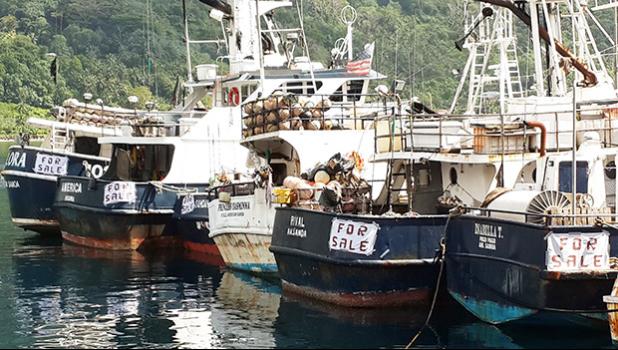 Locally based Tautai o Samoa Longline and Fishing Association has requested a Honolulu federal judge for inclusion in the ongoing legal battle over the Large Vessel Prohibited Area (LVPA) in territorial waters.

The Association made the request in a June 2 letter, to US District Court Judge Leslie Kobayashi, whose decision this past March, vacated and voided the US National Marine Fisheries Service (NMFS) ruling in 2016 reducing from 50 to 12 miles the LVPA. The 2016 LVPA allows the US longline fleet based in American Samoa to fish in the reduced areas of the LVPA, which was initially established by NMFS in 2002 to protect the local alia fishing fleet.

“MAYDAY! MAYDAY! MAYDAY! This is the universal signal for distress!,” declared the first sentence in the letter, which was filed last Thursday by the federal court on its public records of the LVPA case - Territory of American Samoa vs NMFS.

“The U.S. flagged longline albacore fleet operating in... American Samoa is in distress! We need to be rescued!” the letter says. “On any given day, there are thousands of people and organizations working around the world to protect endangered species even though some of these species are not threatened."

“We, the U.S. longliners, albacore fishermen operating out of American Samoa declare ourselves endangered species,” the letter says adding that studies and reports by the Western Pacific Regional Fishery Management Council and NMFS “confirm the dire situation of our fleet, and they have presented this information to you.”

The letter continues, “Our children are in danger from not getting a good education as our family businesses are driven to extinction by powerful forces in a fight for power and money. S.0.S. - Help Needed!”

The Association is petitioning the US Interior Department, the American Samoa Government (ASG), and the federal court “to restore our rights to fish in these waters that you [Kobayashi] have all agreed should be accessible to indigenous peoples of American Samoa.”

“Moreover Judge, you have ruled that cultural fishing activity should be considered in the regulations managing our waters. Any activity that includes our indigenous people and our way of life is part of our culture,” the letter says.

“Isn't this what the ASG says they are fighting for? The NMFS in its effort to encourage fishing in our communities agrees to the same; so, Judge, why would you prohibit us from accessing our waters,” the members asked?  "This has become a conflict on ownership and issues that are beyond fishing rights.”

“Unfortunately, the only ones harmed in this battle is the U.S. longline fleet including us, the indigenous ones that have the right to fish in these waters but are told that we don't. S.O.S! S.O.S.”

The Association members point out that the US longline fleet in the territory is owned by American Samoans and the territory’s governor is fully aware of this fact.

The letter requests Kobayashi to ask ASG “why they would deny that we have the same rights as other American Samoans, and why are we discriminated against while favoring others?”

“You are our only hope in providing justice in this dilemma,” the letter tells Kobayashi. “A truly impartial decision from you would be to allow anyone with American Samoa heritage to fish in American Samoa waters during this ordeal until it is decided who the supreme owner of these waters is, as it looks like this fight will continue until it reaches the U.S. Supreme Court.”

“If we wait until then, there will be no more fleet at the current rate of decline or with our luck, it will be at the end of our fishing season again which runs from May to December,” the letter says and asks Kobayashi, if “there is any legal way for us to be part of this argument without having to pay lawyers?”

“We have no money. Our companies owe a lot of money and we continue operating because if we stop, we will lose our boats and more than 150 families will also lose their source of income as they are either crew members or provide support services such as welders, refrigeration technicians, electrical technicians, etc.,” the letter says. “At present, we already have several boats that have been abandoned and are piling up at the American Samoa ports.”

The letter says the U.S. judicial system must have an avenue for those directly harmed or impacted by a court matter to be heard; otherwise there is no justice for the common person but only for one that has the most money to pay.

The three-page letter includes 15-pages of attachments and some of the longline's arguments going back to 2015 on the LVPA issues.

Regarding the recent ASG motion filed with the court, the Association members allege that the plaintiff “continues sharing false information with this court.”

“The facts contradict the ASG claim that longliners are not harmed by not being able to access the LVPA,” says the letter, which goes on to explain that with the 50-mile boundaries, the longline fleet first have to navigate at least 60 miles out to be able to put their lines in the water.

US longliners are tracked 24 hours a day by the NMFS, “so careful consideration is given to the currents and winds to make sure that our lines are not close to the boundaries.”

“Economically, this is a huge impact,” as American Samoa has less than 200 miles of exclusive economic zone around the territory’s islands because of its borders with neighboring countries such as Samoa, Tokelau, Cook Islands, Niue.

“All of these neighbors have large fleets of Chinese and foreign vessels fishing in them,” the letter points out. “Within our EEZ, we also have designated marine sanctuaries and monuments that have also reduced fishing grounds. When and if we do find some albacore, we try to follow the fish, as tuna is a highly migratory species.”

Albacore tuna does not “belong to the Governor or the future generations or any of the governor's preferred indigenous groups, [as] they are wild and will only have their nationality once its caught,” the letter says.

“Our catches are "U.S." fish, as our vessels are U.S. fishing boats. The southern albacore stock is healthy and not threatened in any way” and this is verified by scientists and regional fishery management organizations.

“Our letter is to request that we have a voice to scream that we exist and that we are the forgotten ones that are directly impacted in this court matter while two powerful sides battle for ownership for these oceans that are not being fished by alias except for a few operating within 10 miles from shore. Swains Island is not inhabited; so we have 50 miles of fishing grounds around each island lost and not accessible,” wrote the Association members.

They concluded, “We, the U.S. longline fleet in American Samoa are the indigenous ones that have dwindled in numbers and are now endangered and on the verge of extinction! S.O.S!”