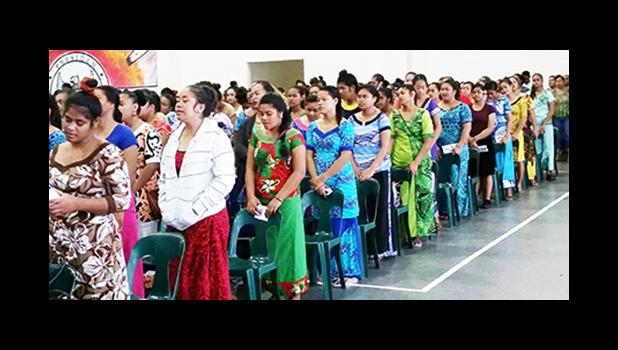 The ceremony was led by Kenneth Kuaea, Deputy Director of the Department of Human Resources (DHR), which administers the annual program.

During his remarks, Rev. Fouvale Asiata of the CCCAS Matu'u/Faganeanea church told the young people to be "faithful" and seize this great "opportunity" which will make it easier for them to succeed in the future.

"Don't go sit at the Marketplace, loiter in other places, and call in to have your counterparts clock-in for you," he said, adding that the SYEP is a wonderful opportunity for them to learn new skills and develop good working habits, which will essentially make their transition into adulthood that much more smooth.

Lolo echoed the same sentiment, telling the youth that their role in the program is not to "make coffee" and run other errands but instead, it is a chance for them to experience what it's like to be part of the working world, and learn new things that will benefit them in the long run.

Prior to his remarks, the governor told all the cabinet members who were present to stand up and be recognized. Only a few officials from various government departments and agencies were in attendance, to which Lolo remarked that those who were absent are "old" and perhaps forgot where they had to be yesterday morning.

He urged the youth to take control of their future by seizing the opportunity provided by the SYEP to get on-the-job training, and in order for them to move forward, they needed to get off on the right foot, a strong start.

According to Lolo, when his administration first took office back in 2013, the SYEP enrollment only averaged between 100-150 participants. "Today, there are 800 of you," he said, adding that this is a fulfillment of his administration's goal, to see the youth of American Samoa grow by giving them the resources to get ahead.

The 800 young workers will be placed in over 60 sites already confirmed within the American Samoa Government and the private sector.

Lolo said that despite the financial hardships facing the government, they continue to find a way to assist the territory's youth so they can help them 'move forward.'

He referred to the proposed Youth Center that is slated to be constructed in Tafuna, at the site of the old VA Center and said he wants to make good on his promise of promoting the youth because they truly are the future of the territory.

The governor said that many politicians often refer to the youth as "tomorrow's leaders" and the "future of American Samoa" but nothing is ever done to cater to the young people. He said that he, as a politician, will make sure that the youth receive the services they need in order to become effective leaders.

"You are the future," Lolo told the crowd of young people. "Make sure you take what you learn during these weeks in the SYEP to not only better your families, but also your village, and your community."

DHR Director Eseneiaso J. Liu, in her remarks, gave special recognition to Utu Abe Malae, the Executive Director of the American Samoa Power Authority (ASPA) whom she said has offered to pay for ten slots for the SYEP.

She explained that the money to fund the program this year was limited but thanks to Utu, an additional ten slots will be paid for by ASPA.

Last week, supervisors of worksites — both public and private — where the youth will be employed during the next few weeks, underwent an orientation session.

Today, a classroom component session for the young workers will be held at the Samoana High School gymnasium, overseen by DHR's Moana Purcell.

Student workers will be disbursed to their assigned worksites this week.

According to the fiscal year 2017 budget, a total of $250,000 is allocated for the Summer Youth Employment Program, under the Special Programs budget category which is administered by the Governor’s Office.