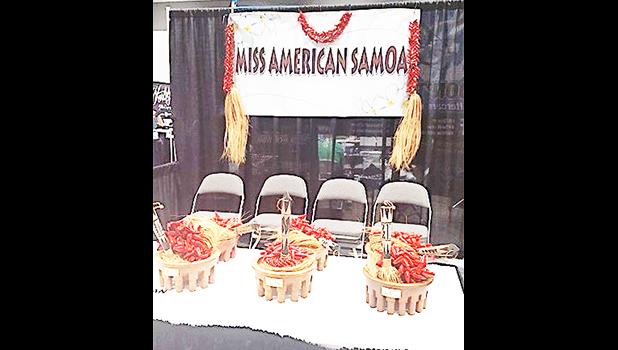 This year's pageant coincides with the 25th anniversary of the Miss American Samoa Incorporated (MASI), an organization that was founded to assist in the coordination of local pageants, as well as prepare the winner for the Miss South Pacific competition.

A panel of judges is yet to be confirmed, although pageant organizers are beginning to feel the heat of a slowing economy and hard times, evident with the lack of corporate sponsorship this year.

A request is being made to the government to help finance the pageant, as it has become difficult to secure adequate financial assistance from local businesses.

Nonetheless, the show will go on, according to the MASI president.

The deadline for applications was August 15th and Imo says they aren't accepting any more.

Aua, where reigning Miss American Samoa Antonina Lilomaiava is from, will be represented this year by two girls: Shalom Moana, sponsored by Paradise Pizza; and Sharane Tofi Smith, 23, sponsored by NAPA Samoa, where she works as a store supervisor.

Hailing from Afonotele, Alao and Ofu, Manu'a is another contestant — Feiloa'i Thompson, who is being sponsored by her family and friends.

The contestants will be briefed on the rules and requirements of being an ambassador for the territory, in the weeks leading up to the Sept. 15th pageant, to be held at the Gov. H. Rex Lee Auditorium (Fale Laumei) in Utulei.

Everyone is invited. "Come out and support your favorite contestant," said Imo.

“This year, it's mainly about giving back to the former Miss American Samoa winners,” Imo explained, adding that the one-time beauty queens will be recognized throughout the night, highlighted through a slideshow of old snapshots and a 'recognition period'.

They will also be entertaining the crowd that night, and as a bonus, each of them will be given another chance to walk the runway, as they did when they won the title.

Invitations have been sent out to all former titleholders, except for some who have moved off island and cannot be located.

For now, as Lilomaiava is getting ready to relinquish her crown, the unveiling of her "reading corner" project inside the Pediatric Ward at the LBJ Medical Center will be made once the final touches are complete.

The goal is to get children — who seek medical assistance at LBJ — to find their passion for reading at an early age.