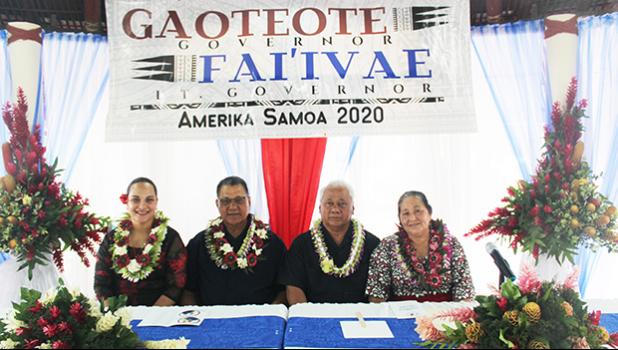 Gaoteote, a US military veteran, delivered his speech in Samoan, saying he and Faiivae “offer ourselves and our lives” as candidates for the gubernatorial race to continue their service - “tautua” - to the government, people, family, village, and community.

He spoke of how to prepare for a better and prosperous future for American Samoa, and implement changes and improvements to achieve those goals in the coming years. While the gubernatorial team plans to unveil in the coming months specific details of their plans, Gaoteote did touch on some issues such as finances, economic development, health, education, public safety and homeland security, government infrastructure development, cultural and native rights, veterans, youth and women, and senior citizens.

He said he and Faiivae along with their families are humbled by the outpouring of support, and he expressed gratitude and appreciation to everyone.

Faiivae, who delivered his speech in English and also spoke on behalf of Gaoteote, shared a “few words about our life of service”.

In the coming months, he said, “you will have the opportunity to hear more from us and hopefully, you will be able to make the best decision as to which team possesses the important qualities of leadership that our Territory will need as we undergo important transitions in our government.”

Fai’ivae noted that in November, voters will have the “opportunity to select, to see who will be best fit to serve, to lead, and to address the challenges that are constantly changing locally and our global environment.”

“We do believe that leadership starts in the home. It takes a village to mold great leaders, and although we come from different villages….we do share a common track record of service.”

(Gaoteote is from Vatia while Faiivae is from Leone).

Both are currently “serving in the Fono - the American Samoa Legislature - as senators; the most unique legislative body of all states and territories as ‘Tama o le atunu’u’ or ‘Fathers of our country.”

“Our forefathers created the Fono with much wisdom and foresight and to preserve the fa’asamoa at the forefront amid the growing challenges entering our shores from around the world,” Faiivae said.

(Samoa News notes that senators are selected by ranking traditional leaders of their respective counties, while House members are elected by voters from various districts territory-wide).

Fai’ivae noted that both he and Gaoteote “were selected by our extended families to hold our families’ high chief titles” and  “we believe it is our responsibility and our duty, 24-7, to see that peace and harmony [is] maintained in our families, especially our respective villages.”

“We firmly believe that great leaders emerge from years of providing service,” said Faiivae in his written speech. “We uphold the laws of the land and continue to lead our extended families to living daily Christian values for a more peaceful and prosperous island community.”

As to the campaign theme, Faiivae told the audience that he and Gaoteote agreed with the campaign committee “to use our Samoan expression as our theme. We believe it describes and reflects our life’s journey.”

In English, the “theme simply means - Leadership through Service,” Faiivae said, while in the written speech, the theme is elaborated further - “The pathway to leadership is through service. We continue to dedicate our lives to service and we wish to continue along this pathway with your support.”

Speaking on behalf of himself and Gaoteote, Faiivae thanked all those who attended the official announcement ceremony. He also thanked their families both here and abroad, as well as campaign chairman, Malaepule Moliga, committee members, and all members of the US Army Forces.

In conclusion, he said, “Gaoteote and I humbly ask the voters” of American Samoa “for your support, your prayers, and your vote on November 3rd.”

Malaepule, the campaign chairman - who is also the brother of Gov. Lolo Matalasi Moliga and current director of the Dept. of Administrative Services - told the audience that Gaoteote and Faiivae are prepared to continue to serve the government and people of American Samoa.

In between the candidates’ speech, the Gaoteote-Faiivae Samoan campaign song was played.

Among senators who were in attendance and also invited were Nuanuaolefeagaiga Saoluaga T. Nua - who is also the Senate President Pro Tempore - and Satele Galu Satele Sr.

Samoa News observed Nuanuaolefeagaiga and Gaoteote - with big smiles on their faces - shaking hands and embracing each other before the start of the event. Gaoteote also shook hands with Satele and the two spoke briefly.

(Nuanuaolefeagaiga is also a candidate for governor and his running mate is Sen. Satele’s son, Tapumanaia Galu Satele Jr)