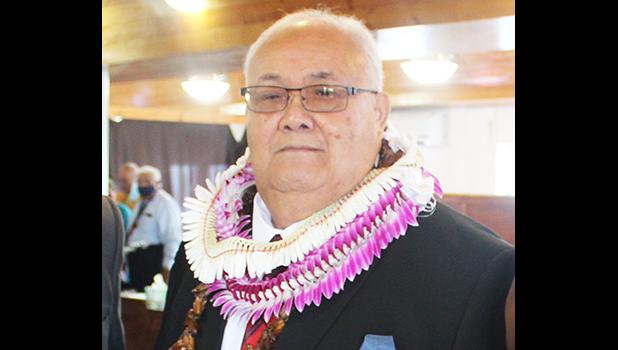 Pago Pago, AMERICAN SAMOA — Retired associated judge, and traditional leader, Lefiti Falelaulii Pese, is American Samoa’s new Police Commissioner, after being confirmed by the Senate yesterday, while the House handed down its approval earlier this week.

The Senate vote followed Lefiti’s confirmation hearing earlier in the day before the Senate Public Safety/Homeland Security Committee, chaired by Sen. Fai’ivae Iuli Godinet, as a group of family members, Department of Public Safety personnel and others were in the Senate gallery in support of the nominee, a titular leader — referred to as “Fa’atui” — from Manu’a.

Lefiti was among the 159 stranded local residents who arrived on Feb. 1st on the first repatriation flight from Honolulu and went through 14-days quarantine at the Tradewinds Hotel.

In his opening remarks delivered with an eloquent Samoan salutation, Lefiti informed the committee that he had received communication — while off island — from Gov. Lemanu Peleti Palepoi Sialega Mauga, that he had been selected for the Police Commissioner post.

He also told the committee that he has never broken the law during all the 52-years he served in government and he fully supports and will enforce the United States and the American Samoa constitutions if confirmed by the Fono.

Senate President Tuaolo Manaia Fruean addressed the hearing and recalled that when the voters decision was made that the gubernatorial team of Lemanu and Talauega won the 2020 general election, Lemanu asked about the post of Police Commissioner.

Tuaolo said Sen. Utu Sila Poasa, was present during that gathering when this was discussed and can vouch for it. (Tuaolo didn’t give specific date of when the discussion involving the police commissioner post occurred.)

Tuaolo said he responded pointing out that Mauga was appointed to again serve as Secretary of Samoan Affairs and noted the Fa’atui — Lefiti — for the commissioner’s post. And that no matter how long Lefiti was off island, the police commissioner post would remain for Lefiti, until he returned to the territory.

Tuaolo is thankful that Lefiti has returned home safety. According to the Senate President, all senators wanted a chance to welcome home the nominee during the confirmation hearing.

And the truth is, there shouldn’t be a need for a vote, he said, adding that the Senate —  “Maota Maualuga” — is the heart of the Samoan culture, where senators are traditional leaders.

Tuaolo then shared with Lefiti an incident about a week since the repatriation passengers arrived on island. Tuaolo said he and his wife were pulled over by a young police officer in front of the Veterans Memorial Stadium, with the officer saying that their vehicle didn’t stop at the stop-sign near the Tafuna Police Substation.

He said the young police officer gave them a traffic ticket, despite his wife asking for leniency — telling the officer that her husband, is a senator and the Senate President.

Tuaolo said he’s not requesting “special treatment” for senators, but he did point out that during his tenure as police commission a few years ago, his directive to police officers at the time was that, anytime there is an issue involving lawmakers, the officer should not make a decision, even on something that a lawmaker wants, but to contact the police commissioner.

Also at the time, if there is a lawmaker, who needs help, such as late getting to a hearing due to traffic problems on the road, a marked police car nearby can escort that lawmaker to the hearing. Tuaolo says this is the sign of respect but the young generation of officers nowadays are different and Tuaolo asked for Lefiti to counsel the young officers, not to be too hasty in making decisions.

Sen. Malaepule Saite Moliga addressed the committee, not as a senator but as a Manu’a traditional leader pertaining to Lefiti. Malaepule then moved to dismiss the witness and for senators to approve the nominee.

Fai’ivae said the chance given to Malaepule to address the committee was because of his role as a traditional leader. And now that Tuaolo has spoken, Fai’ivae moved to end the hearing, and thanked the governor for appointing a titular leader to the post.

The committee gave Lefiti their blessings.