Scientists discover one of world’s largest corals near Ta'u, Manu’a 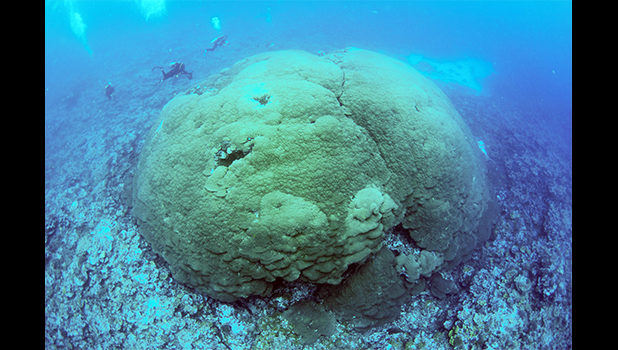 New discovery of Porites Coral in the Pacific

Ta'u, MANU'A — A team of marine scientists based in American Samoa recently documented one of the world’s largest known corals. The massive Porites coral measures 22.4 meters across, 8 meters tall, with a circumference of 69 meters at the base. This makes it larger than any previously documented corals in American Samoa. Scientists estimate the coral is between 420 and 652 years old.

This finding is part of an ongoing project coordinated by the American Samoa Coral Reef Advisory Group (CRAG) to catalog and measure all massive Porites colonies around the island. The team is comprised of scientists from the Department of Marine and Wildlife Resources, National Park of American Samoa, and the National Marine Sanctuary of American Samoa.

“Identifying areas where long-lived corals thrive is critical in evaluating changes in climate patterns and evaluating resilience factors that can improve management of coral reef ecosystems in the South Pacific,” said Georgia Coward, Coral Reef Ecologist with CRAG and lead author of the study. “Due to the large number of these massive colonies, it is evident that the island of Ta’u has ideal conditions that support these resilient corals, and this warrants some level of protection.”

The team made the discovery late last year and also documented 84 individual Porites measuring over 10 meters in diameter and 393 between 6–10 meters. Their findings have been published in the latest issue of Nature Scientific Reports: A new record for a massive Porites colony at Ta’u Island, American Samoa | Scientific Reports (nature.com)

A second phase of the project will begin in early 2021 and will revisit and measure these corals to determine their rate of growth while also assessing their habitat.

The National Park of American Samoa, the only NPS unit south of the equator, provides habitat for oceanic paleotropic rainforests and Indo-Pacific coral reefs that are unique within the NPS system. The park’s purpose is to preserve and protect the tropical rainforest, coral reefs, archeological and cultural resources of American Samoa, to maintain the habitat of flying foxes, preserve the ecological balance of the Samoan tropical forest, and, consistent with the preservation of these resources, to provide for the enjoyment of the unique resources of the Samoan tropical forest by visitors from around the world. Learn more about the park at: www.nps.gov/npsa