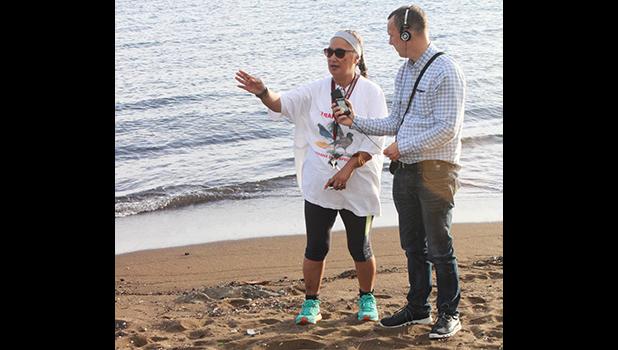 She also shared with Bergendorff - who was on island over the weekend - the environmental importance of mangroves in Leone. A large  ASG billboard - describing the importance of mangroves -  is erected on the bank of the stream where the mangroves are, to educate those who visit the site. Besides American Samoa, Bergendorff is also looking at other Pacific islands faced with the same threat of climate change and sea level rising, such as Fiji.

“Swedes are very worried about the effects of climate change - three times faster temperature rise in our Arctic region than global average - so my listeners want to know how global warming is affecting other countries as well - such as the sea level rise in Pacific islands like American Samoa,” Bergendorff told Samoa News.

Bergendorff asked Rep. Samoa to share her views on obesity and type 2 diabetes, as part of Swedish Radio reports in the Pacific and other parts of the world. When asked why an audience in Sweden would be interested in obesity in American Samoa, which is thousands of miles away from Europe, Bergendorff said he has been covering health challenges (due to obesity) in many of the 40 countries he has visited in the last five years.

“In Sweden, half the adult population is overweight or obese; and type 2 diabetes is on the rise also in my country,” he explained. “I am looking for solutions in different countries to this problem we all face and since American Samoa has even greater challenges than my country in this issue, I thought there might also be interesting ideas for prevention here that my audience - half the population of 10 million daily - can learn from,” he added.

While here, Bergendorff interviewed two local residents, as well as Loata Sipili of LBJ Medical Center and others on obesity and diabetes. Regarding his first ever visit to American Samoa, Bergendorff  said “it has been great meeting the very friendly and welcoming Samoan people during my three days here.”

“And Rep. Samoa gave me a very interesting and honest interview about the challenges American Samoa is facing when it comes to obesity and sea level rise,” he continued, adding that he hopes someday he will return for a holiday in American Samoa with his family. While on island, Bergendorff experienced White Sunday with children performing songs and skits, and got a taste of Samoan food during Sunday toana’i.