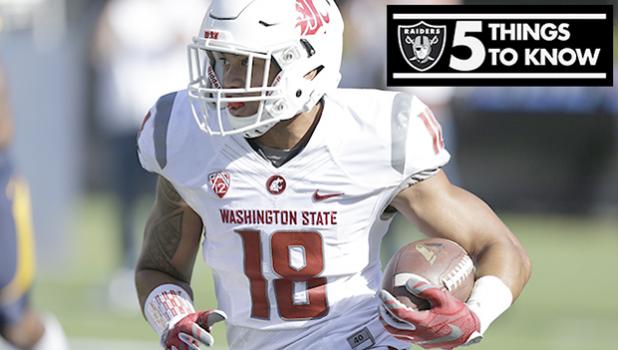 Five Things To Know About Defensive Back Shalom Luani
By
Raiders.com staff

With the 221th overall pick of the 2017 NFL Draft, the Oakland Raiders selected Washington State defensive back Shalom Luani.

After trading out of the sixth round of the 2017 NFL Draft, the Oakland Raiders ended up with four seventh round picks. The first selection of those four was Washington State University defensive back Shalom Luani.

Here’s a look at five things you should know:

The region of Pago Pago is commonly known as a string of villages, but Pago Pago is the capital of American Samoa. It was also the site of coaling and a repair station for the U.S. Navy between 1878 to 1951.

Not only is Luani an athletic football player, but he’s an incredible soccer player that’s played for the American Samoa Football Association Soccer League. He scored in the first-ever FIFA-sanctioned win against Tonga, and was slotted at the forward position. Aside from playing in high school, he was called up to the American Samoa senior team.

Luani is familiar with the Bay Area.

Following his participation in American Samoa soccer, he headed to Chabot College of California in 2012, located in Hayward, Calif. After a season with the team, he joined the football team at City College of San Francisco, eventually being recruited by Washington State.

He’s a physical defensive back.

In his 5’11”, 202-pound frame, the former Cougar is known for his hard-hitting style of play. Luani is a quick and agile when it comes to playing the ball, and Raiders General Manager Reggie McKenzie emphasized to the media Friday that he’s a “playmaker.”