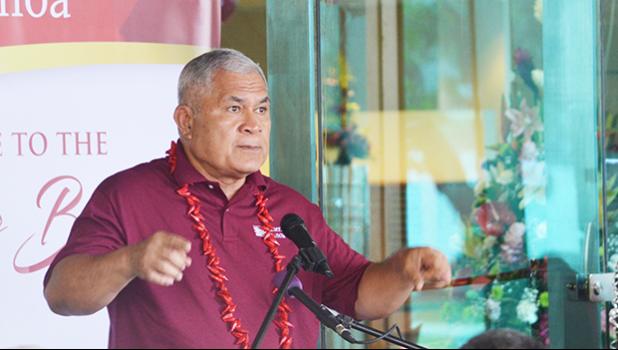 Says educating the youth on financial management is the key to future success
By
Ausage Fausia
ausage@samoanews.com

And to make sure the territory doesn't duplicate those problems, Utu recommends that ASG give our youth the chance to be educated in the fields of financial management and accounting, so they become fully equipped with the right knowledge and skills that are needed to manage and control government revenues in the future.

Utu said managing and controlling government finances are the main reasons why the two aforementioned US territories find themselves in trouble and he doesn’t want these problems to be repeated in American Samoa.

Utu was responding to a statement from Human Resources director Eseneiaso Liu, in regards to the lack of people with financial management and accounting skills in American Samoa.

Utu said the problem the US Virgin Islands is having has to do with the pension fund, also known as the retirement fund, where there is an unfunded liability to the tune of about $2 billion.

He said the problem is "they failed to manage their revenues and financial status properly. There has to be someone with financial management and accounting skills who can address the problem."

For Puerto Rico, Utu said the problem has to do with their power company, whose board of directors and CEO failed to manage their financial situation wisely, and as a result, they ended up over $9 billion in default on their loan.

Utu said American Samoa should be alert on this issue, and must be cautious on what our leaders do, to ensure ASG never faces the same problem.

Regarding the two territories, Utu said, "Not only did they not have the dual skills, we also found out that the Board of Directors and the CEO of the Puerto Rico Power Company were the ones who created the financial problem. It was the Board and the CEO's decisions that changed everything for the government. I feel for the employees but at the same time, it’s a wake up call for American Samoa."

When problems like this happen in a government, Utu said leaders should not blame the employees, because it isn't they who created the problems, “it's from the people who are in charge of these things, and the management.”

He said we can learn a good lesson from these two US territories, "and I know for sure that we don’t want to go there. We have to avoid that because I'll be very ashamed if American Samoa faces the same problem. I’m very proud of our island. We’re different from other countries of the world.”

“We have our own culture and the ‘Fa’aSamoa’ our people are living everyday. We are not like Hawai’i, where the business community is now running the government. We are very different and I’m so proud of that. I don’t want us to be put in the same category with these Caribbean Islands — they are different from us.”

Utu told the Cabinet that the reason why he wanted to share this information with them, is because he believes financial and accounting skills are the two most essential things in a government, and our government leaders really need to work on it, so we can have people with these skills making good decisions for the government in the future.

As an example, Utu said that if we talk about taxes, there are some basic things that the government and the people need to fully understand.

“When we talk about taxes, what comes to mind is a tax incident, a tax incident is the effect of applying a tax to something. If we apply a tax on something and the business refuses to pay it, the people will pay it, and they are the ones who will suffer the most.

He said if the government is charging businesses a tax, “you’re really charging the people, not the business itself — and that’s the basic thing. So we should be mindful and look at ways to protect our government and our island from these financial problems.”

“We have come a long way in terms of developing our island. The problem we’re facing is that we are so isolated from the mainstream, but despite these problems, we are still moving forward in terms of finances and developments, through the knowledge and the skills of our leaders. We want to do the same thing for our children. We want to educate them to become good leaders in the future,” Lolo concluded.