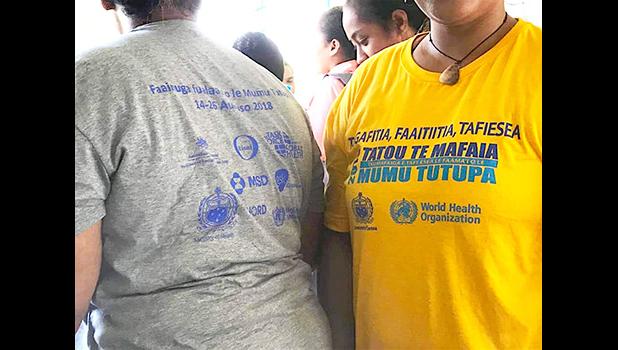 This MDA photo was from Aug. 14th on Savai’i island before the mass treatment moved to Upolu.

According to the US Center for Disease Control and Prevention (CDC), lymphatic filariasis, considered globally as a “neglected tropical disease”, is a parasitic disease caused by microscopic, thread-like worms. It is spread from person to person by mosquitoes.

Speaking at a recent cabinet meeting, ASG Health Department director Motusa Tuileama Nua said American Samoa is working on addressing Lymphatic Filariasis. The World Health Organization and CDC, along with LBJ and DoH, are trying rid American Samoa as well as independent Samoa of the disease.

He explained that American Samoa will work jointly with Samoa on the MDA for Lymphatic Filariasis with the MDA for American Samoa set to start Sept. 12th, following a church service on Sept. 9th to kick off this important health event.

Gov. Lolo Matalasi Moliga has urged DOH to continue communication links with Samoa not only for this disease, but all other diseases affecting the two Samoas.

DoH started a public campaign, last week, on lymphatic filariasis, putting out awareness messages through the media, including paid advertisements in both English and Samoan published in Samoa News. (See Samoa News Monday, Aug. 20, 2018 edition for the latest message.)

Once identified as having one of the highest infection levels in the Pacific, American Samoa has recommitted with the CDC to revitalize efforts to eliminate the disease by 2024, according to a DOI news release, which notes that it’s expected that two rounds of mass drug administration with triple drug therapy will be needed to eliminate the disease altogether in the territory.

Details of the report can be found at <www.journals.plos.org>