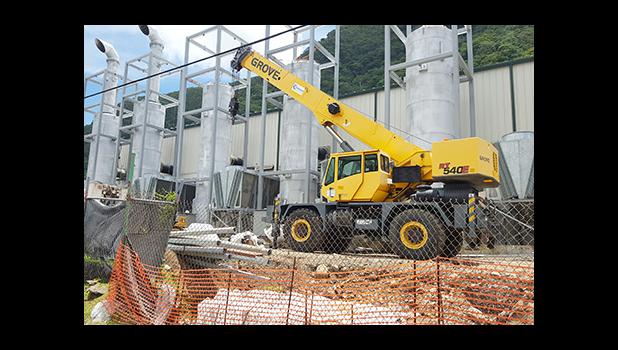 The American Samoa Power Authority (ASPA) is in the midst of completing several multi-million-dollar projects that will benefit the residents of Tutuila and the Manu’a island group.

ASPA Executive Director Utu Abe Malae reports the construction of the new power plant in Satala is about 90% complete, and is expected to be in operation as early as January 2017.

“The contractor is making good progress,” Utu said via email correspondence to Samoa News over the weekend.

The prime contractor for the project is Louis Berger Power.

Texas Power is the subcontractor (for all plant equipment), and local company Paramount Builders is in charge of building construction.

The new power plant replaces the old one that was damaged during the devastating 2009 earthquake/tsunami. According to Utu, the new plant is being funded by the Federal Emergency Management Agency (FEMA) for $35 million, along with proceeds from ASPA's 2009 tsunami insurance claim of $17 million, bringing the total project cost to $52 million – the priciest post-tsunami project for the territory.

In other ASPA news, work is ongoing in the Manu’a islands with the goal of serving the island group with 100% renewable energy (RE) this year.

“Another 500 kWh of battery storage will be installed later this year on Ofu, bringing total storage capacity on Ofu to 1500 kWh,” Utu continued.

Utu said RE generation in Manu’a is expected to save 175,000 gallons of diesel per year.

He added that the Ta’u project would be commissioned later this month on October 27th, while commissioning for the Ofu project is tentatively set for a month afterwards.

For this project, ASPA will replace all light bulbs and tubes with LED lighting in all buildings across Manu’a. According to Utu, streetlights will also be replaced with LED lighting and this DSM program will be at no cost to customers in Manu’a.

“This is an effort to reduce both demand and energy usage on both islands, and will result in lower electric bills for customers,” Utu said.

The DSM effort is thanks to the Department of Interior (DOI) grant total of $362,000.

Utu told Samoa News the new diesel generators installed at the Ofu and Ta’u power plants will be operated during extended periods of inclement weather. “The diesels will be controlled remotely by a master controller which is located at the PV site,” he explained.

“New diesels were required for a number of reasons,” Utu shared. “The older diesels are unable to communicate remotely with the master controller at the PV site. Solar PV systems alone are unable to generate enough fault currents during system faults (necessary for the satisfactory operation of distribution line fuses) — so the diesels will be used for line sectioning in order to locate feeder faults.”

When asked how many people will benefit from the service, Utu said all the people on Ta'u and Ofu -Olosega islands will benefit (900 on Ta’u and 500 on Ofu – Olosega).