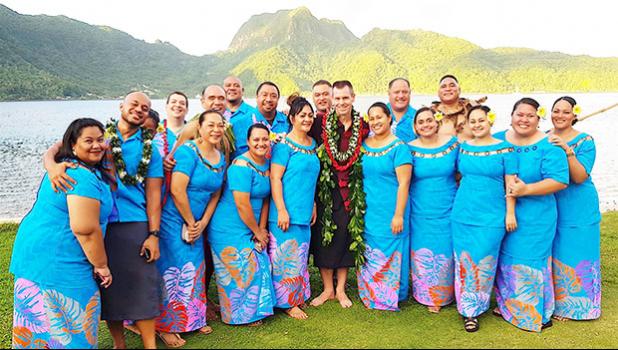 While more flights depend on passenger demand
By
Fili Sagapolutele
fili@samoanews.com

Pago Pago, AMERICAN SAMOA — With more seasonal flights for the summer and scheduled for the Christmas holiday, Hawaiian Airlines has increased the number of its seats by about 15% this year compared to the prior year for the Honolulu-Pago Pago route, thanks to the Airbus plane which features more seating capacity.

This is according to the airline’s president and chief executive officer Peter Ingram, during a Samoa News interview yesterday morning prior to meeting with Gov. Lolo Matalasi Moliga where several issues were discussed.

The two main issues that have surfaced over the past years regarding Hawaiian’s flights are: high airfares, and too few flights to Pago Pago, for which the airline currently operates two weekly flights year-round, but adds extra weekly flights during the summer months and the Christmas holiday.

In terms of airfares, Ingram said, “We understand, everywhere we fly, that people would appreciate lower airfares [and] we’re working very hard to manage our cost structure, as best we can.”

Unfortunately, he said, jet fuel prices have been going up globally since 2017 and “that actually puts pressure on us, but we’re going to continue with ways to operate as efficiently, as we can.

“We understand that for an island territory, like American Samoa, air transportation is vitally important. So we want to make sure that we’re serving the community in a responsible way,” continued Ingram, who has been with Hawaiian for more than a decade and took over the leadership post early this year.

As for flight frequency for American Samoa, Ingram explained that early this year, the Honolulu-based carrier started operating the Airbus 830 aircraft, which is “a larger aircraft than we had before” providing “some extra [seating] capacity into the market.”

He said the airline explored opportunities, and added more extra seasonal flights for the summer and Christmas holiday for 2018, and a little bit longer into January 2019.

“Overall, we’ve got about 15% more seats flying this year than we did the prior year... operating a larger aircraft and operating more of the extra seasonal flights,” he said. “We would love the opportunity to add even more capacity.”

He explained, “For us, it is a matter of really trying to schedule that capacity to meet the demand that is there. So if there’s more demand, [for flights that] we can operate, we would absolutely love to do it.”

But, “What we can’t do is just add empty flights because that will just add more costs that end up having to be passed on to people who are traveling.”

For the summer months this year, Hawaiian had already scheduled 13 extra flights, which are from June 6 to Aug. 28th.  For the Christmas holiday, there are six extra flights, starting the first week of December into mid-January 2019.

“The loads in that period are pretty good, so we looked and we said, ‘let’s challenge ourselves a bit, see if we can grow the market a little bit’,” said Overbeek, who accompanied Ingram to the Samoa News interview along with the airline’s vice president of corporate communications, Ann Botticelli and local station manager, Tuli Fruean.

Overbeek said there’s one week between Christmas and New Year, where the “demand wasn’t strong enough”, but they still decided to move forward with the extra flights into mid-January 2019.

“We recognize and want to continue to kind of push and challenge ourselves, making sure that we’ve enough seats in the market to be able to meet the demand, particularly at that time of the year, when people want to get together with their families,” he said.

Besides participating in yesterday afternoon’s blessing of the airline’s cargo facility at the Pago Pago International Airport, Ingram also met with Hawaiian's local employees. While he has been with the airline for about 13 years, Ingram was involved with the business side at headquarters, not the operational side.

“Part of my new role [as CEO] in traveling to where Hawaiian Airlines flies [is] spending time, introducing myself more, to our employees,” he said, adding that while he is well-known at the company’s headquarters, “some of our people in different locations don’t know me well.”

“So it’s my opportunity to talk to them and introduce myself a little bit more, but also to listen to their concerns,” he said and noted that this was “probably the most important part of the trip for me, spending time with our employees.”

The local staff hosted the Honolulu delegation with an ava ceremony and dinner  Wednesday night. The staff also performed a Samoan siva for the event.

Ingram said the airline has about 40 people in its workforce and “they are absolutely terrific. They are wonderfully engaged and dedicated to our company, they’re very curious about the opportunities for the future.”

Samoa News will report in Monday’s edition on other issues covered during Ingram's interview.