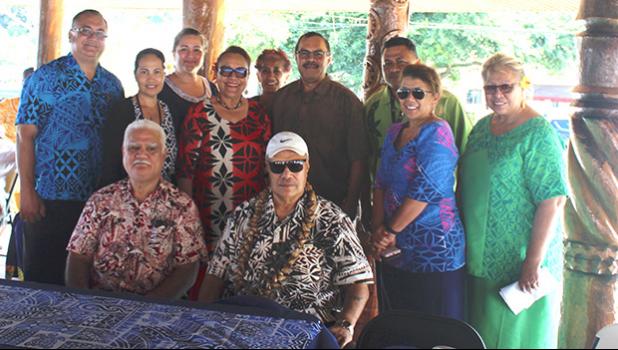 Pago Pago, AMERICAN SAMOA — More than $40,000 was donated by the community on Wednesday, the first day of the ASG-organized “Fesaosoani mo Samoa Fundraising”.

Gov. Lolo Matalasi Moliga has appealed directly to the private sector — in a letter — for their support to assist Samoa with the deadly measles outbreak that has claimed more than 60 lives, the majority of them children.

Among the businesses that donated Wednesday was Nana’s Company, whose president Fiapa’ipa’i Fruean, accompanied by her husband, Sen. Tuaolo Manaia Fruean made their presentation to the committee around 2p.m.

More than 20 Nana’s employees were on hand for the presentation inside the Fale Samoa, at Suigaula o le Atuvasa Park in Utulei. Committee members — or their representatives — including co-chairs Mauga Tasi Asuega, who is also the Secretary of Samoan Affairs; and ASG Treasurer Ueligitone Tonumaipe’a, were present.

Some of the more than 20 employees of Nana’s Company posing for Samoa News , after the company’s president, Fiapa’ipa’i Fruean, accompanied by her husband, Sen. Tuaolo Manaia Fruean made a $20,000 donation to the ASG-organized “Fesoasoani mo Samoa Fundraising” event on Wednesday at the Fale Samoa at Suigaula o le Atuvasa in Utulei. [photo: FS]

Mauga spoke on behalf of the committee and the governor, thanking Nana’s for the contribution, saying every Samoan in American Samoa has blood ties to Samoa and therefore it’s important for American Samoa to help the independent state.

ASG officials told Samoa News that the broadcast by Taupau will continue until the last day of the fundraising, on Dec. 20th, in an effort by the government and the committee to ensure transparency.

Early this week, the governor wrote directly to local businesses…“our humble plea for assistance whether monetary or in-kind that your company would generously donate, which, when combined with all other donations received, will reflect our local assistance to Samoa.”

According to the governor, the National Hospital of Samoa in Apia is “facing grave shortages of supplies”, which includes basic items such as bed linens, towels, supplies for babies and young children.

“Any kind of donation will be most welcome even though monetary contribution is preferred,” the governor continued, noting that all donations will be fully recorded for publication and sent along “with our donations to Samoa.”

He explained the reason for staging the fundraising, which he said is for the entire territory, “anchored in the hope that we will maximize whatever assistance possible to help ease the suffering faced by our brothers and sisters in Samoa.”

He said the health crisis currently threatening the lives of the people of Samoa, particularly babies and young children, has prompted ASG to host the fundraising event. At the start of the governor’s letter, he tells businesses that, “Regardless of your nationality and ownership affiliation, the fact that you have been authorized to conduct business in American Samoa makes you and your business an integral part of our community.”

“Your commitment to serve the people of American Samoa declares your willingness to assume your duty and responsibility to promote the values and tenets advanced by our government,” he added.

For business owners who are not Samoan, Lolo said, “I am sure that you have some sense of the close kinship and cultural ties between... Samoa and American Samoa.”

Some in the business community have questioned whether non-Samoan owned businesses should take part in this event, especially small Asian stores set up across the island, with many of their employees being non-Samoan.

The committee released yesterday the list of drop-off locations for “Saturday only” for cash, canned goods, dry goods, and toys for Christmas.

Telephone center is accepting pledges at 633-0581.

Nana’s Company president Fiapa’ipa’i Fruean (second from left), and her husband, Sen. Tuaolo Manaia Fruean (second from right), posing for a Samoa News photo with two company employees after Nana’s made a $20,000 donation to the ASG-organized “Fesoasoani mo Samoa Fundraising” event on Wednesday at the Fale Samoa at Suigaula o le Atuvasa in Utulei. [photo: FS]