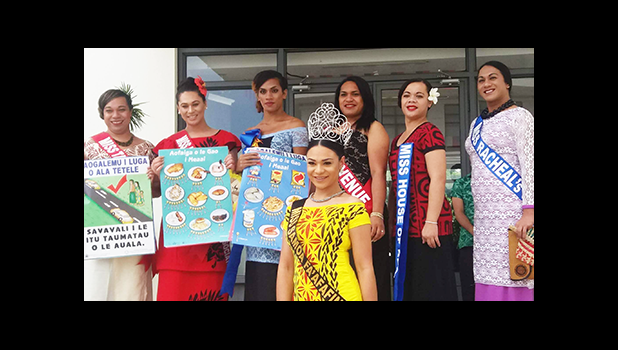 Apia, SAMOA — The Samoa Faafafine are gearing up for the final stages of the 10th Anniversary of their major fundraising event, the annual Miss Faafafine Pageant.

Although the pageant started in 1983 at the Tiafau Hotel under the then Crimes Ordinance regime where the crime of female personation existed, in its current iteration and in the modern era, there have been 9 pageants and this year marks the 10th winner to wear the crown Miss Faafafine.

President of the Samoa Faafafine Association (SFA) So’oalo To’oto’oali’i Roger Stanley is proud of the association’s achievements and thankful for the support of the public, the sponsors and the government ministries that have partnered with SFA over the years to deliver one of the most entertaining events for Samoa’s social calendars.

“Of course we are all proud of what we have achieved. We put on a great show, we make fun of ourselves on stage and for the public, and we raise some funds for charities. I mean, as fa’afafine, that’s what we do. But we would not be able to do this without the public’s support, without our sponsors, without the government ministries who partner with us and support us”, says Stanley.

This year, the Ministry of Health is bringing the event to the stage for the title Miss Health Faafafine 2016 with the theme “Eat The Colors Of The Rainbow” to promote healthy eating of a variety of colored fruits and vegetables on the island.

SFA’s beneficial charity this year will be the Mapuifagalele Home for the Elderly.

Program of events are over a period of 6 days — and began on Sunday, August 28, 2016 with a church service. The pageant will be held on Friday. Sept. 2.  The show starts at 7.00pm at Gym 1, Tuna’imato. Tickets are $20 WST and limited corporate tables are still available.