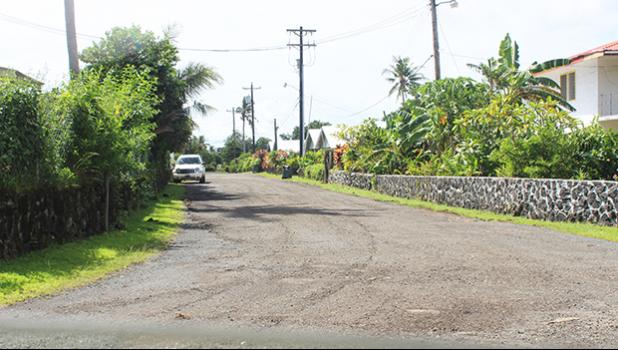 Pago Pago, AMERICAN SAMOA — This Samoa News photo Friday, Apr. 3rd, shows Cardinal Pio Road, one of the side roads in the Fatuoaiga and Ottoville area, with large, deep pot holes that have since been fixed with recycled asphalt following an urgent request from Tualauta Rep. Larry Sanitoa to McConnell Dowell American Samoa and Public Works Department.

Sanitoa requested DPW for a backhoe and maintenance crew to help repair the side roads to Hope House and Fatuoaiga as these roads are in deplorable conditions with huge potholes.

“As you may know, there are several residents being quarantined at Fatuoaiga and so there are several big vehicles using these roads to deliver food, etc.,” Sanitoa wrote early last week to DPW requesting a crew and backhoe. In a separate written request to McConnell Dowell, he also asked if they would provide recycled asphalt (materials) for the project.

Sanitoa also requested McConnell Dowell for its crew to repaint the cross-walks in front of Pacific Horizons Schools (PHS) — on the Jason David Street — as well as the one on Ottoville Road as both roads are heavily traveled and many people cross the roads in these areas.

Both DPW and McConnell Dowell responded quickly. Sanitoa sent a thank you letter to DPW, on behalf of Bishop Peter Brown, the Hope House Board, residents and motorists, “for your immediate response to our request to repair the… deplorable side roads to Fatuoaiga.”

Sanitoa also wrote to Jake Braithwaite, project manager for local McConnell Dowell, extending a “fa'afetai tele lava to you and McConnell Dowell” for the re-striping the crosswalks and “donating several loads of recycled asphalt to help fix the deplorable side roads toward Fatuoaiga…These side roads are used daily for delivery of supplies to those being quarantined.”

“McConnell Dowell has been an exceptional corporate citizen for our community by continually offering to support and assist with numerous infrastructure projects and school improvements especially for our Tualauta district,” said Sanitoa and extended appreciation to McConnell Dowell’s “commitment and willingness to help the communities especially the most populated district of Tualauta.”

Braithwaite responded saying that the company is “always willing to help where we can and hopefully the school and community are happy with the outcome.”

“I know there are a few other areas on island that you are targeting for some repairs. When we have some down time with the crews, I will be in touch to see what we can do to assist,” Braithwaite added.

McConnell Dowell’s offered this service free of charge to the government and it is part of the company’s commitment to assist the community.

This courtesy photo from last week, shared with Samoa News shows the newly repainted crosswalk in front of Pacific Horizons School on Jason David Street, which is one of the heavily travelled Ottoville side roads. It’s also one of the streets heading in and out of Fatuoaiga. Repainting was carried out by a crew from McConnell Dowell as part of the many community projects by the construction company. [courtesy photo]

This courtesy photo last week shared with Samoa News shows the newly repainted crosswalk at the corner of Ottoville road and Jason David Street in the Ottoville area. The crosswalk was painted by a crew from McConnell Dowell, a construction company, which often contributes to the community through such projects. The Ottoville road, which has no sidewalks, is a busy road with constant traffic of motorists and pedestrians. It’s not unusual to see drivers speed on this road. [courtesy photo]