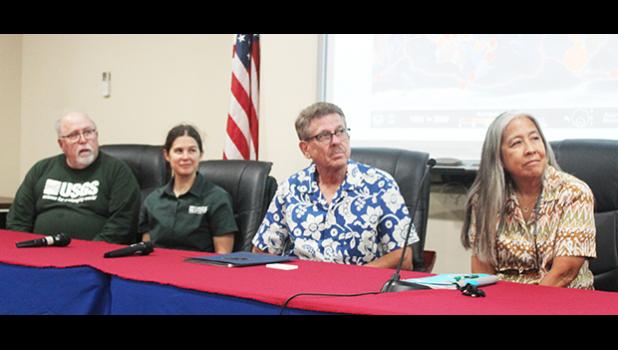 Pago Pago, AMERICAN SAMOA — The strongest tremor recorded for the Ta’u volcano earthquake — in the Manu’a island group — is around 4.0 on the Richter scale, and the number of quakes has declined compared to when it was first reported 8 weeks ago, says Dr. Natalia Deligne, the Volcanologist with the Hawaiian Volcano Observatory during a news conference yesterday.

Dr. Deligne explained that the earthquakes at Ta’u volcano began 8 weeks ago, with the first report July 26. And the swarms continue, although the number of earthquakes has been low for two weeks now.

Responding to media questions, Dr. Deligne reiterated that the swarms of earthquakes at the Ta’u volcano has quited down but tremors are still reported but have decreased from when the first one was reported 8 weeks ago.

With the low numbers, the U.S Geological Survey — whose offices include the Hawaii Volcano Observatory, which oversees volcanoes in Hawaii and American Samoa — will start transition from a daily update of the Manu’a situation to weekly updates starting today, Sept. 22 and the updates will be issued every Thursday, said Dr. Dr. Deligne.

Elinor Lutu-McMoore, metrologist-in-charge of the National Weather Service Pago Pago, who attended the news conference said daily updates of the Manu’a volcanoes and earthquakes are also provided to ASG through the Emergency Operations Center.

Other information that Dr. Deligne shared during her presentation on earthquakes includes that the current best estimate of the Ta’u volcano earthquakes location is approximately 3 to 9 miles north of Ta’u island about 10 to 15 kilometers below the surface.

Additionally, the source of the earthquakes has not moved within the earth since monitoring began over 5 weeks ago and that the source position has remained constant.

“One thing we want to express, is our heart-felt thank you” to residents of the Manu’a islands for their continued reporting of the earthquakes, which includes sound description, said Dr. Deligne.

Even the reporting of unusual activity is very helpful to USGS, she said,

For USGS activities, she shared that they will continuing monitoring the Ta’u volcano, primarily using the American Samoa seismic network and providing  update information on the status of the volcano.

And the priority now for USGS activities, is evaluating options for “hardening the monitoring network,” given logistics, budgets, and personnel availability. The short-term aim is to harden stations so that they keep providing data for a year or two.

For long term, the aim is to “permanentize stations” - “this involves material we did not bring with us in this initial deployment” — with the budget for routine servicing.

Samoa News will report in future editions on other issues from the news conference held at the local Homeland Security EOC in Tafuna — and these reports will include the tsunami presentation by Dr. Kong and Dr. McCreery.