Man who pled guilty to drugs, weapons, and escape gets 40 months 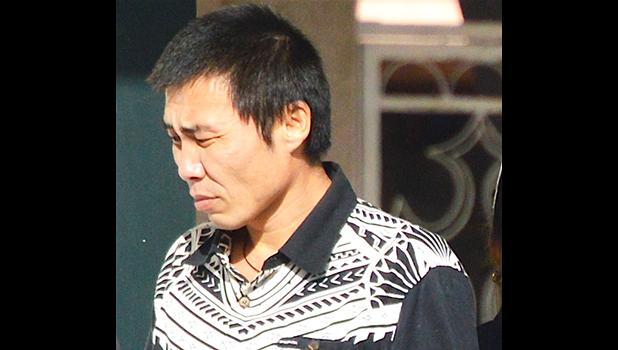 Pago Pago, AMERICAN SAMOA — The 38-year-old Chinese national who was arrested in 2016 on drugs and weapons charges has been ordered by the High Court to serve 40 months at the TCF and thereafter, he must leave American Samoa and remain outside its borders for a period of 5 years.

Also, despite the order by Chief Justice Michael Kruse last month for the government to produce all the items that were seized in Tao Liu’s case to court, nothing was presented when Liu appeared in court last week for sentencing.

It’s a common practice for the court — during sentencing for individuals convicted of unlawful possession of drugs — to order that the illegal substances, along with any contraband that were seized by police, be brought to court and thereafter, destroyed.

None of the items were presented to the court last week.

During court proceedings last week, Tao Liu asked the court to send him back to his family in China, so he can spend the rest of his life caring for his elderly mother and look for a better future. He also wants to return to China with his 2-year old son, who is in custody of the DHSS.

Liu made his statement to the court through an interpreter who translated court proceedings from English to Mandarin.

For his first case, the defendant was arrested and accused of being in possession of a handgun and drugs uncovered during a traffic stop in Aug. 2016.

For the second case, Liu was charged with escape from confinement, a class D felony.

The defendant, through an interpreter, admits that on or about the evening of Aug. 21, 2016, he was in possession of methamphetamine, marijuana and an unlicensed firearm. He further admits that while he was held in custody to await the outcome of his case, he escaped from TCF.

Liu told the court he is from China, and he entered American Samoa in search of a better future for him and his family back home.

“During my stay in American Samoa, I’ve made so many bad decisions, including violating the laws of the territory, and I am here to express my apologies to the court for my wrongdoings,” the defendant said through an interpreter.

“I understand the court will hardly accept my request and apology, but I truly seek the court’s forgiveness for my actions and ask for a chance so I can go back home with my 2-year-old son, who is under the custody of the government. I am remorseful and ashamed of my actions.”

Liu's attorney, deputy public defender Michael White, had nothing to add to his client’s statement to the court.

Prosecutor, Christy Dunn informed the court that the defendant's 2-year-old son has been in the custody of DHSS since the day of his arrest.

Kruse made clear to Liu and his attorney that the Trial Division of the High Court has no jurisdiction on the issue involving Liu's 2-year-old son. That is a matter before the Family, Drug & Alcohol Court (FDA).

According to Kruse, Liu was brought over in 2012 to work at the Karaoke Bar in Satala, which is owned by a lady who was convicted of promoting prostitution.

“And according to the information before the court, this lady passed away not long ago,” Kruse said. Dunn responded, “Yes, your honor, and my understanding is that this defendant’s immigration record expired in May of last year.”

Kruse continued, “And that Karaoke Bar was shut down some time ago consequential to the criminal case that surfaced at that time. Is he still sponsored by the lady who passed away?” Dunn responded, “That’s my understanding.”

For escape from confinement — the second case — the court sentenced Liu to 5 years in jail and a $5,000 fine. The sentence will run consecutively with the punishment from his first case.

Execution of the terms of imprisonment are suspended and Liu is placed on probation for 5 years under the condition that he serve 40 months at the TCF without any release. He is not eligible for trustee status and he has to submit to random testing. He will be credited for the 33 months he has already been locked up. Once released, Liu must immediately depart the territory and not return anytime during probation.

The court has ordered that Liu and his sponsor pay the $5,000 fine.

The court also ordered that a copy of the judgment be served to the Chief Immigration Officer to ensure that Liu's name is on their lookout list.