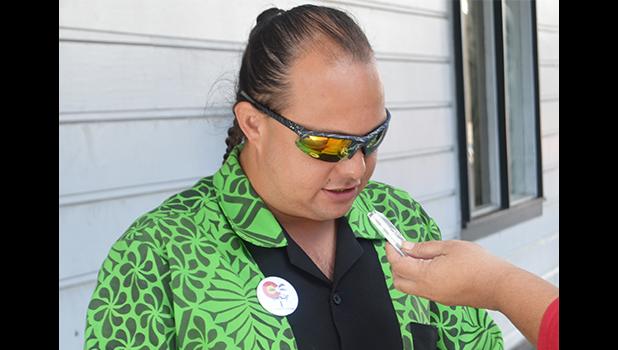 A Hawaiian Airlines passenger from Colorado who was arrested for possession of marijuana back in September 2015 is now a free man, after Chief Justice Michael Kruse granted the government’s motion to dismiss the case against him last Friday.

Assistant Attorney General Gerald Murphy asked for a dismissal of the case due to the government being unable to prove its case beyond a reasonable doubt. However, when Murphy went to explain the government’s other reasons, the Chief Justice cut him off —  saying the court is granting the government’s request to dismiss the case against Loma without prejudice for lack of prosecution.

“The court does not want to hear any more “fagogo” from your office”, Kruse said.

When asked by Kruse if he had any objections to the government’s motion, Loma, who represented himself in court for the second time, said he didn't.

He then made his way outside of the court room with a smile on his face.

Samoa News asked the Ass’t AG to elaborate on the reasons why the government moved to dismiss Loma’s case. Murphy replied that the government received letters from two psychiatrists at the LBJ Hospital, confirming that Loma is a recovering crack cocaine addict, who suffers from chronic carpal tunnel and arthritis-like pain in his wrists due to injuries he sustained in a 2014 bicycling accident.

“After reviewing these letters from the two doctors at the LBJ Hospital, we believed that it would be a good decision to dismiss our case against the defendant,” said Murphy.

As a condition of the verbal agreement between the government and Loma, Murphy told Samoa News that Loma will depart the territory and remain outside for the rest of his life — he will not re-enter the territory again; and if he does, the government will immediately re-file this case against him.

Murphy’s appearance in High Court last Friday was his last, as he did not renew his contract with the AG’s Office. He left island Monday night.

When asked how he felt about the case being dismissed, Loma said that he was really happy about the decision and he has faith in God that one day the truth will be revealed.

Speaking to the media outside the court house, Loma explained that he is a registered medical marijuana patient in his home state, and he traveled with his lawfully-prescribed, legally obtained medications from Denver, Colorado to American Samoa.

He also noted the lack of warning signs inside the Honolulu Airport, to warn foreigners and travelers who are coming to American Samoa about how serious its laws are on drugs and illegal substances.

Kruse took over the case earlier this year in June.  Prior to that, Associate Justice Lyle L. Richmond handled Loma’s case, and the last hearing was July 2016 when the High Court took under advisement a motion by the defendant to suppress evidence that the government collected when he was taken into custody.

Marijuana was found in Loma's luggage after a Customs dog alerted to him as he was going through Customs clearance. The two Customs agents who discovered the prohibited substance on the night of September 11, 2015 were witnesses for the government.

Loma said his whole purpose for coming to the territory was to work on problems of plastic pollution and beach mitigation on the island. He said that plastic pollution in the Pacific Ocean region exceeds 78 tons of waste, and there are dozens of local and international entities throughout the South Pacific seeking to develop remedies to this global catastrophe.

Three months after Loma was arrested and charged by the government, Kruse called on the American Samoa Government to consider warning foreigners and the traveling public who enter the territory on how serious local law enforcement takes certain crimes — namely sexual assault and the unlawful possession of the controlled substance: marijuana.

His comments were made during the sentencing of the Don Bosco adult volunteer who was charged together with two Don Bosco students, who came to the territory as part of the contingent from Samoa to participate in the 2015 Flag Day festivities.

Kruse noted that bringing marijuana into the territory is punishable by five years in jail. He suggested that the Tourism Office disseminate this information so foreigners would know how serious the territory takes these crimes.