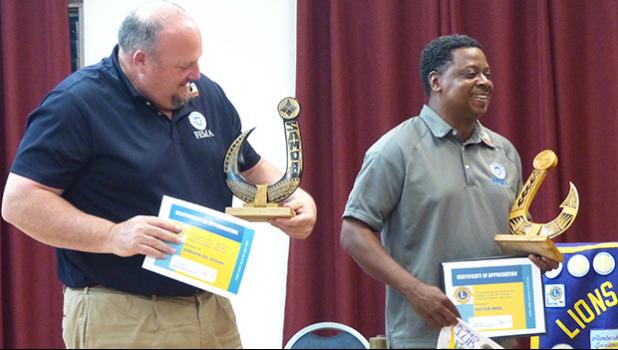 Also given a special award for the same heroic effort was FEMA’s Chicago-based visual imaging manager, Dominick ‘Dom’ Del Vecchio, who was on island but ha  s since returned to the mainland. Del Vecchio’s award was accepted on his behalf by FEMA Region IX Administration, Robert Fenton (left).

Inge, who had been on island for two days following Tropical Storm Gita, recalled over the weekend, that it was Apr. 8, a Sunday and it was pouring rain.

He and Del Vecchio were outside the Tradewinds Hotel, looking for a backdrop under the pavilion to interview Congresswoman Aumua Amata for a FEMA video project.

“We looked, but didn’t notice anything. A couple minutes later [the young boy] came back and said ‘help, help my sister’,” Inge said. “Then we noticed two little girls apparently struggling to try and save another one.”

“Without saying anything we ran toward the pool. Dom was closer than I was. Dom emptied his pockets and dove in fully clothed,” said Inge adding that he started looking for a pole or something to hand them.

“It wasn’t long before we realized it was three small girls. He [Dom] slung one toward the steps, then tried to get the other two to the edge, but they were fighting him, trying to stay above water,” he explained.

“I went around to where they were closest to the edge and laid down, hanging over the edge until I could reach Dom. I was able to barely keep them above water, then (pull them) slowly to the edge,” he said, noting that by that time, help was there.

Peggy Capehart, another FEMA colleague, “appeared out of nowhere and grabbed one of the girls by the arm and pulled her onto the deck,” said Inge. “All I could do by then was try to keep from being pulled in and keep Dom above water. He [Dom] was holding on to the other frightened little girl.”

Inge points out that it all happened too fast to think. “We just reacted. The girls were scared, throwing up, but fine. Hate to think about what could have happened if we weren’t out there,” he said.

“The moral to the story is to never leave children unsupervised in a swimming pool. The adult said she went back inside for just a few minutes,” he said.

Del Vecchio, who is back on the mainland, confirmed in an email over the weekend, details of what happened as recalled by Inge. “Glad the girls are safe now. A few minutes later, and who knows what would have happened,” Del Vecchio  said.

In a separate email over the weekend, Capehart also confirmed what happened, adding that, I’ve “never been the person on the sideline. Trained and certified to rescue as well as assist at all times.”

“Also, glad the girls are safe now. My young adults are always saying, ‘Mom you are always trying to save the world’,” Capehart said.