Le'i takes offense over questions about training of cops for guns 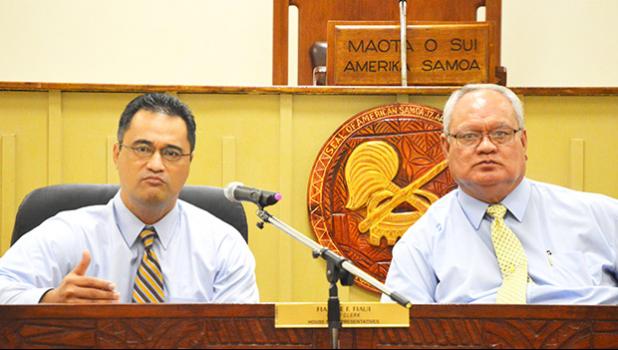 Police Commissioner Le’i Sonny Thompson was not in the mood when faipule started asking questions on whether local police officers who have been certified to carry weapons have received all the necessary training.

Le’i and Attorney General, Talauega Eleasalo Ale were called to testify during a House Public Safety Committee hearing regarding the arming of local cops and other issues pertaining to DPS services.

When Vice Speaker, Fetu Fetui Jr. asked Le’i to explain how the training to arm police officers was conducted, the Commissioner said all the information about the training was included in the lethal force policy, already presented to government leaders, including the Governor, House Speaker, Senate president, and AG.

“It's spelled out clearly in the lethal force policy, that the training was not because police officers want to carry guns to threaten or to have a war with the public — it’s all about the safety of the people. Our role is to uphold the law and protect our country. We cannot protect the community with empty hands," Le'i said.

“As I've always stated before, things happen. We want to make sure the community is safe and the lives of our sworn police officers are also protected,” he continued. “As I keep saying — for the protection of our leaders, elders, the public and everyone in the territory — police officers need to be armed and ready to respond at anytime.”

Fetu said there are a lot of concerns from the community about the arming of police; and because of this, people are now saying they too have rights under the Constitution to be armed.

Le’i agreed, saying every citizen of American Samoa has the right to be armed, but they have to bring their weapons to the Commissioner to get them registered.

“The law is clear," he said, adding that under the law, citizens can possess certain weapons including a 22-rifle, 12-gauge, 19mm and 17-glibber rifle.

"As for police officers, the law is already in the books, the Commissioner has the authority to provide training for police officers. As you are aware, every time federal personnel come to our island, they always carry weapons. I have no doubt that our police officers… have the ability to make good decisions when it comes to the use of deadly force,” Le’i said.

Another Manu’a faipule, Rep. Vesi Talalelei Fautanu Jr. echoed the same question and said one of the biggest problems in the US, such as Los Angeles, has to do with the wrongful shooting of people by police.

He said he doesn’t want the same problem in American Samoa adding that the first phase of training is now complete, and the instructor, who has returned to the US, is not scheduled to be back until next year.

Vesi then pointed out that no mental evaluations were conducted for the cops who have been certified to carry weapons, and he wanted to know whether our police officers could do the job alone, without the presence of the instructor, Mr. Haleck.

Le’i said he has full confidence that all certified police officers have the ability, knowledge, and skills to make good decisions.

He referred to his opening statement, where he said police officers were trained on deadly force, and how to use the baton and pepper spray which all come before the use of a gun — is the last resort.

“Let me tell you something,” Le’i said, raising his voice, “We received our training from someone who is highly respected in the United State police force, and we need to give credit to that person. Most of all, you have to respect and trust the people who are sworn to uphold the law — those are the cops.”

“We should not try to question how they do their work or try to philosophize what they know or whether they are well trained,” he said.

Le’i recalled an incident that occurred at the Vice Speaker's home two weeks ago, to which he and other cops responded. According to the Commish, when they arrived at the scene, they saw a guy destroying a vehicle with a machete, and the cops responded with no weapons.

“A machete!” Le’i said while looking at Vesi. “So now, you tell me, how are you going to respond to an incident like this with someone holding a deadly weapon? Have you ever seen someone who is really high on drugs?”

“Honorable faipule, I’m telling you, I can’t sleep well at night while police officers are out there doing their job. You called me here to discuss the law in the books, and I’m glad to answer your questions but when you start to ask me questions about 'if' and 'what' — we can’t operate on 'if' and 'what'.”

Le’i responded, “I know that, but you just made a statement today about a cop being shot because he didn't have proper training — but that is the past. I don’t want to bring back [up] those things.”

The Commish concluded, “There are many issues that we need to discuss, and I’m challenging all of you to come ride in a police vehicle with me on 2:00a.m. on Saturday and Sunday, then I'll show you what I'm talking about. That's the time you will see with your own eyes what I’m trying to explain. You will see the way people who are on drugs behave and how police officers respond.”

Despite the brief exchange of words during the hearing, committee members and the two government officials were able to iron things out, and concluded the hearing by agreeing that the administration and the Fono need to work together for the betterment of the community.