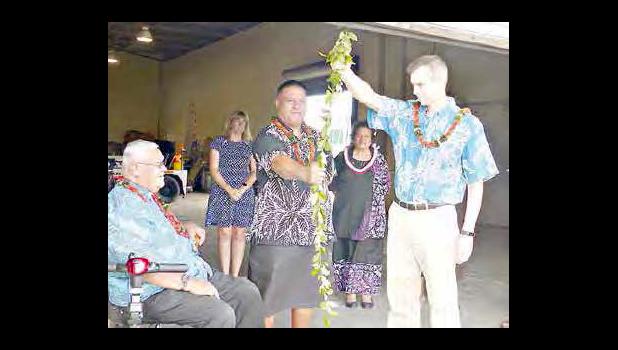 Pago Pago, AMERICAN SAMOA — Limited inventory of visitor accommodations in American Samoa is one of the challenges for Hawaiian Airlines in growing the local tourism industry, while the Honolulu-based carrier is looking at helping local fisheries with fish exports.

These are some of the issues raised by Samoa News during an interview last Thursday morning with Hawaiian Airlines president and chief executive officer, Peter Ingram, who led the company’s delegation from Honolulu that met with the governor and visited the airline’s local workforce.

Asked what Hawaiian Airlines is working on for local tourism development, Ingram explained that the airline’s sales team collaborates with third-party travel agencies and with the American Samoa Visitors Bureau “on opportunities to present at different travel conferences ... travel packages for the territory to help stimulate tourism.”

“I think one of the challenges we see with how much [tourism] can grow is, we still have a very limited inventory of accommodations overall in American Samoa,” he said and explained that for a tourist to visit, “one has to be aware” of the destination.

Ingram said Hawaiian can help “generate awareness” of American Samoa being a visitor destination on its flights.  “But once they are aware, they need to be able to understand the infrastructure on the ground in terms of, accommodations, rental car services or other amenities that people need,” he said.

And “that is something that is beyond the scope of what we operate,” he said and noted that “we have a good relationship and have a good dialogue with the American Samoa Visitors Bureau, on how we can bring different constituents in the tourism sector together.”

“But accommodations are really going to be a limiting factor for the long term — in terms of how much we can stimulate demand” for tourism, he said.

The Visitors Bureau has been on the forefront in promoting American Samoa in the US but there have always been concerns over the years from local industry officials that there is still a shortage of accommodations, which hampers tourism development efforts.

The Lolo Administration has looked at building a new hotel at the old Rainmaker Hotel site in Utulei, to boost not only accommodation, but tourism infrastructure, however that has been an ongoing process. Find information on travel and deals for American Samoa on: www.americansamoa.travel

Ingram along with three other senior airline officials were also on island for the blessing of its cargo facility at Pago Pago International Airport. Asked about this project, Ingram explained that prior to taking over the president/CEO post, he had served as chief commercial officer, and one of his responsibilities was cargo.

And the last time he was on island, about two years ago, he had the opportunity to visit the cargo facility, which he says “was in need of repair.”

“So this was an opportunity to reinvest in our business. We’re going to grow some capability as well,” he said, noting that repairs and upgrade of the cargo facility is the first phase.

“Later on this year, we intend to install some ‘chillers’ - [which] are like refrigerator freezers — so we’ll be able to take care of certain perishables,” he revealed. “We’ve got perishables inbound already, [and] the more we can keep them cool, the fresher they stay.”

And the airline is also looking at the “chillers” for fresh fish export from American Samoa, he said, and explained that most of the cargo carried by Hawaiian Airlines is inbound from Honolulu to Pago Pago.

“We’ve got a lot of empty space [for cargo] going out. And it’s a matter of creating the opportunity to find some demand,” he said. “And one of the things that was conceived was, we can invest in a chiller facility and then have local fisheries... bring some of their product for export” on outbound flights.

ASG has been talking about fresh fish export for a long time as another fishery development, and under the Lolo Administration, the Department of Commerce is working on moving this forward, through the proposed “super alia” project.

DOC fishery development coordinator, Tamatoa Tony Langkilde told Samoa News two months ago that the super alia “will also satisfy the demand of local consumers. And it will create a new export product, which is high-end fresh fish — to Hawai’i and the US mainland. Therefore, it would be new earned income for our territory.”

DOC has published paid advertisements in the Samoa News in the past several weeks as part of its awareness campaign on the super alia.