The Jeanette is underwater — US Coast Guard launches investigation 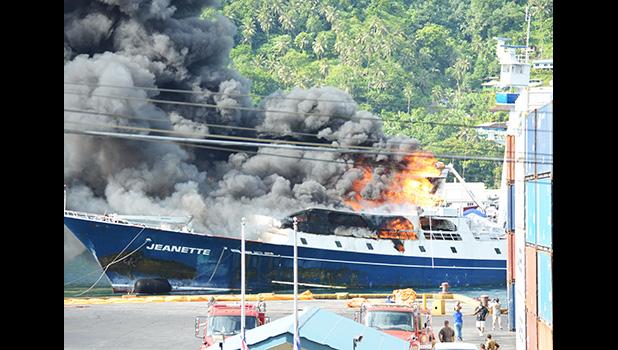 Pago Pago, AMERICAN SAMOA — The Jeanette, the purse seiner that went up in flames this past Wednesday, Dec. 5th, while it was docked at the main wharf in Fagatogo, is now underwater — and officials from the United States Coast Guard (USCG) are currently investigating how it happened.

Head of the USCG Marine Safety Detachment, Lt. Al Blaisdell told Samoa News yesterday that the Jeanette — while it was 17 miles south of Tutuila — sank at 10:30a.m. yesterday, despite reports that the vessel was still on fire.

According to Lt. Blaisdell, there are two main issues they are looking into: how the Jeanette sank, and how the fire started. He said he and his staff started interviewing people yesterday and interviews will continue today. "It's going to take a while," he said, referring to the investigation.

"The responders will be working closely with a salvage team," he said, adding that the fire is considered a "major marine casualty."

On Wednesday morning, according to sources, a fire broke out in one of the Jeanette's cabins and it seemed as if responders had managed to get it under control; however, several hours later, the fire became uncontrollable and there was nothing left to do but tow the vessel off shore.

A thick cloud of black smoke, coupled with 20-ft flames — and concerns that toxic gas was in the air — caused a scare in the town area.

When asked about a possible oil spill, Lt. Blaisdell said there was diesel fuel on board but it was stored in an integrated tank that is built into the vessel. "Over time — in about 10 years — eventually, the tank will rust but there is a salvage team responsible for coming up with a plan to address this. Coordination has to be made with them, as they are the experts in this area."

The crew members of the ASG Iseula tugboat, which towed the Jeanette off shore, were given the green light yesterday afternoon to return home.

Lt. Blaisdell explained that the crew stayed out and kept watch of the vessel overnight, and they were on shifts to ensure that everybody had the chance to eat and sleep.

When asked for a recap of what happened Wednesday, Lt. Blaisdell said he and his staff were with the crew from the local Fire Department when the fire started.

"Nobody knew how big is was going to get," he said, adding that after collaboration with Port Administration, they agreed that the best course of action was to tow the vessel out of the harbor, as there was concern for the diesel fuel and the 300-gallon gas tank on board, in addition to the ammonia (used as a coolant) which — if caught on fire — is toxic to humans.

"At first, the fire looked small; but it quickly grew out of control. Once the black smoke started coming, the Fire Department was instructed to cut the mooring lines. The Iseula tugboat was hooked to the back end of the Jeanette and the vessel was towed out," Lt. Blaisdell recalled.

He said the goal was to hug the channel as much as they could, so if the Jeanette sank on its way out of the harbor, it wouldn't cause a blockage for incoming vessels.

He said they could have cut the line and let the boat go but this would have been dangerous, as there wouldn't be any way to know for sure which way the boat was going to drift.

"We ended up deciding to tow it out, keep it off shore, and maintain watch," he explained.

Yesterday afternoon, Starkist spokesperson Michelle Faist issued a statement on behalf of the cannery. "On behalf of StarKist, we are sorry for the loss of the Jeanette and send our sincere condolences to the vessel’s owner, Joe Finnette. We are thankful that no one was injured."

According to Faist, Finnette, and the Jeanette have supplied fish to StarKist Samoa for many years. "They have been a wonderful partner and this is a significant loss to us, and to the American Samoa fishing industry."

Samoa News understands the Jeanette was carrying a big load of fish when it went up in flames.  It was waiting for its turn to unload its catch at the cannery.