Interior Secretary Zinke concludes trip to the Pacific Islands with visits to the U.S. Territories and Hawaii 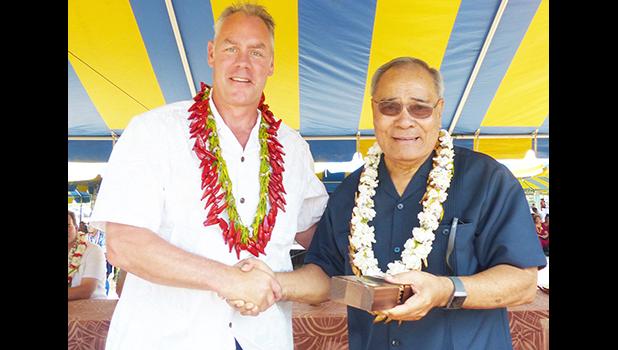 WASHINGTON — U.S. Secretary of the Interior Ryan Zinke has wrapped up his trip to the Pacific Islands where he began in Nauru as head of the U.S. delegation to the Pacific Islands Forum (PIF) and concluded with stops in Guam, the Commonwealth of the Northern Mariana Islands (CNMI), American Samoa, and the State of Hawaii before returning back to Washington. While in American Samoa, the traditional leaders bestowed upon him the chiefly title of Fofoga o Samoa, which translates as Voice for Samoa.

“It is with great honor that I accept this title bestowed by the people of American Samoa,” said Interior Secretary Ryan Zinke. “It is highly symbolic and appropriate given my responsibilities for fellow Americans in the U.S. Territories. This trip to the Pacific has been about the United States’ commitment to the security and prosperity—not only of our friends and neighboring Pacific Islands, but also of our U.S. territories in the Pacific. A secure and stable Pacific relies on the strength and security of the U.S. Pacific Islands of Hawaii, Guam, Saipan, and American Samoa. I am humbled by my role as a voice not only for Americans in American Samoa, but in all our territories.”

At the beginning of the trip, on September 4, 2018, Secretary Zinke led a high-level U.S. government delegation—comprised of senior officials from the White House, U.S. Department of State, U.S. Department of Defense, U.S. Department of the Interior, the U.S. Coast Guard, and the U.S. Agency for International Development—to the 30th PIF Leaders Session with Forum Dialogue Partners. While in Nauru, the Secretary led bilateral meetings with President Peter M. Christian of the Federated States of Micronesia (FSM), President Hilda Heine of the Republic of the Marshall Islands (RMI), Republic of Palau Minister of State Faustina Rehuher-Marugg, and Nauru President Baron Waqa. The FSM, RMI, and Palau have unique and special partnerships with the United States under the Compacts of Free Association, under which funding is administered through the Department of the Interior. The U.S. delegation also met with New Zealand Foreign Minister Winston Peters and representatives from other Dialogue Partner countries such as the United Kingdom, Japan, Canada, and France.

Leaving the PIF, Secretary Zinke traveled to Port Moresby, where he met with Prime Minister Peter O’Neill and other high-level officials to highlight the importance of the U.S.-Papua New Guinea relationship and continued engagement and support for development, defense, and conservation efforts. He also visited the three U.S. territories in the Pacific: Guam, the CNMI, and American Samoa, where he met with Guam Governor Eddie Calvo, CNMI Governor Ralph Torres, American Samoa Governor Lolo Moliga, and other government, business, and traditional leaders in each of the territories. Interior has been the steward of relationships with each of the U.S. territories since they joined the American family—some over a century ago. The Secretary also visited the national parks in each of the territories, highlighting Interior’s role in the protection and conservation of resources.

On Guam, Secretary Zinke joined Governor Calvo and other members of his administration for a meeting with the Guam Chamber of Commerce to discuss challenges specific to Guam related to economic development and Compact Impact. The Secretary and his delegation also met with Rear Admiral Shoshanna Chatfield and other high-level Department of Defense Officials on Guam. They closed out their visit on Guam with a tour of the Museum of Guam where they also met with National Park Service (NPS) Superintendent Barbara Alberti and other employees of NPS, the Fish & Wildlife Service, and the U.S. Geological Survey.

On Saipan, in the CNMI, Secretary Zinke was met by Governor Ralph Torres and members of the CNMI Legislature where they enjoyed a beautiful CNMI sunset before discussing important matters related to workers and the CNMI economy. The Secretary and the Governor laid a wreath at both the Court of Honor and the American Memorial Park, met with National Park Service employees, stopped at Banzai Cliff, and enjoyed scenic views of Bird Island.

In American Samoa, the Secretary visited the Lyndon B. Johnson Hospital, the StarKist tuna cannery, and the Veterans Clinic. He also met up with the American Samoa National Park Service Squad 61 Firefighters who recently returned from a tour in California fighting fires—where they were also appreciated for their singing skills. It was here during the penultimate stop on the Secretary’s Pacific Islands tour that High Chiefs Mauga and Mida bestowed upon him the title of Fofoga o Samoa, translated as Voice for Samoa.

Secretary Zinke closed out his trip to the Pacific with a stop in Hawaii at the Indo-Pacific Command, underscoring the fact that the Pacific Islands are key to the President’s vision of a free and open Indo-Pacific. The United States is engaged and committed to advancing a regional order based on respect for sovereignty, the rule of law, and the principles of free, fair, and reciprocal trade.