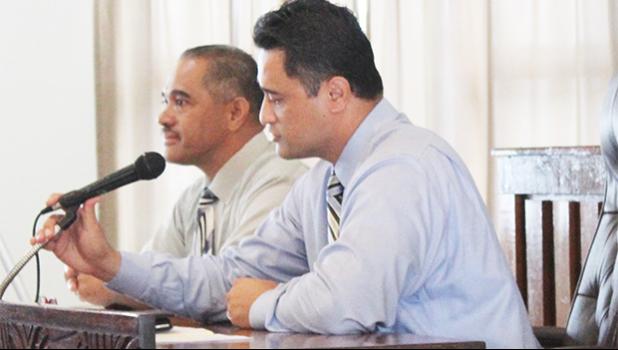 Currently, there is no local drug rehabilitation service on island
By
Fili Sagapolutele
fili@samoanews.com

Attorney General Talauega Eleasalo Ale and Deputy Police Commissioner, Vaimaga Maiava, have voiced their support of a Senate bill, which mandates a minimum five-year imprisonment for those convicted of delivering, dispensing, distributing, possession with intent to deliver, dispense or distribute, produce or manufacture a controlled substance.

Any person who violates this section is guilty of a crime, and upon conviction may be imprisoned for not more than 20 years, or fined not more than $20,000 — or both.

However, the Senate bill seeks to amend that, saying, that any person who violates this section is guilty and upon conviction “shall” be imprisoned “for not less than 5 years” and not more than 20 years, or fined not more than $20,000 — or both.

During the Senate hearing, Talauega said both he and Vaimaga support the measure, and it's something that should be done.

Responding to a committee question, Talauega said that current law appears to give the court discretion on sentencing of up to 20 years, as well as a fine, for a drug conviction.

Sen. Misaalefua J. Hudson said illegal drugs are a long-standing problem and asked if police have identified people involved or those who manufacture illegal drugs.

Vaimaga said yes, but due to the “confidentiality” of such issues, he couldn’t provide specific details. However, he assured senators that police are working diligently to combat illegal drugs in American Samoa.

Sen. Paepae Iosefa Faiai voiced his support of the measure, but said he is a bit concerned with another proposed law being reviewed, as there is the issue of lack of enforcement of laws.

Sen. Tauaa S. Vaouli echoed Paepae's concerns and inquired about rehabilitation for those who are facing serious drug problems. He pointed to a recent case involving a man from his village, for whom no rehabilitation services are available.

Talauega responded that the bill does not address the issue of rehabilitating people with drug problems, and said that Human Resources director, Eseneiaso Liu informed him yesterday morning that there is no local drug rehabilitation service on island.

As to whether a rehabilitation service is available at the Territorial Correctional Facility, Vaimaga said DPS has no jurisdiction on this issue but pointed out that local service providers — including ASG — do offer counseling services for drug offenders jailed at TCF.

Samoa News points out that over the years, the court has noted several times the lack of a rehabilitation or detox center in American Samoa to treat people with drug problems. In the past some families had to pay out of pocket to send loved ones with drug problems off island, usually to Hawai’i, but this requires court endorsement, and monitoring.

At the Senate hearing, Sen. Magalei Logovii noted a provision of current law, which calls for a mandatory 10-year prison term without the possibility of parole and a $10,000 fine for a person who delivers, dispenses, distributes, produces, manufactures or who attempts to deliver dispense, distribute, produce or manufacture a controlled substance in any school or on any school campus in the territory.

Talauega responded that lawmakers at the time, when the measure was enacted into law, probably wanted to provide this specific mandatory jail term for the protection of schools and students.

Magalei noted that attorneys in court would argue for a probative sentence for drug convictions, but the bill takes away that argument by deleting “may” and replacing it with “shall”. He sought clarification from the Attorney General to ensure that the court does not throw out the bill if enacted into law.

The AG responded that American Samoa is a democratic society where, the Fono passes laws, the Executive Branch enforces the law, and the court has the authority to interpret the law — but does not approve new laws. He said perhaps the Senate President sponsored the measure due to the serious drug problem in the territory.

Sen. Tuiagamoa Tavai said he supports the bill but he is concerned with evidence collected in drug cases and other cases, which end up missing. “It has happened before,” he said, adding that such instances are embarrassing to the government and American Samoa as a whole.

Vaimaga acknowledged that evidence has gone missing before, but promised that it will not happen again, as the evidence room at DPS is secure and evidence is well protected.

Tuiagamoa responded, that he hopes Vaimaga’s statement is truthful, and reiterated that it's very embarrassing when evidence goes missing.

Responding to a question from Sen. Fai’ivae Iuli Godinet, who said he strongly supports the measure in an effort to combat the local illegal drug problem, Talauega says he encourages village leaders, including the village aumaga, who conduct patrols in villages and are in charge of village curfews, to report to police any incidents involving illegal drugs.

Gov. Lolo Matalasi Moliga has publicly called on all sectors of the territory to join the government in ridding the “drug crisis” faced by American Samoa.