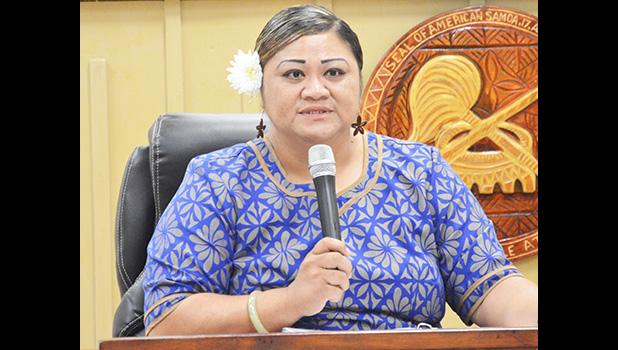 Pago Pago, AMERICAN SAMOA — Vice Speaker of the House, Rep. Fetu Fetui Jr has called the move by the Lemanu & Talauega Administration to roll back pay raises and conversion of several employees from contract to career service as “unprofessional and unfair” during a hearing with the newly confirmed director of the Department of Human Resource, Lynn Pulou-Alaimalo.

Pulou-Alaimalo appeared before the House Government Operations Committee last Friday for questioning about a range of topics, however, the hearing was cut short when faipule learned that there was a tsunami warning for American Samoa.

The committee chairman informed faipule and everyone present in the House chamber that morning that the hearing was done for the day and everyone should move to high ground for their safety.

Committee Chair Rep. Faimealelei Anthony Allen said one week prior to the hearing last Friday that House members have a lot of questions about changes made by the DHR Director and it’s best that they ask her directly.

The chairman gave a list of information that he wants the director to provide when she appears before the Government Operations committee.

•                The status of new ASG employees hired under CARES Act funding. (According to Rep. Faimealelei the employees were to work for six months. However, he understands that many of the youth employees have been released despite the program funding being extended to the end of the year.)

When asked about report requested by the committee including the total number of employees affected by the roll back, Pulou-Alaimalo said she did not provide the report because the roll back is still underway.

No chance was given to Pulou-Alaimalo to respond to the chairman’s question.

Faimealelei told the HR director that according to information he obtained from several ASG employees, she has been given the title of “A leader of fire and hire”.

He continued his statement informing the HR director that if a director wanted to raise the salary of an employee, there is a process that needs to be followed. First, the director would recommended the pay raise for the employee and later seek information from the Budget Office if there are funds available to cover the pay raise.

Once funding is secured, the next step is to ask the Attorney General for a review on whether or not the pay raise for the employee is made according to the law before the paper work is forwarded to the Governor’s office for his approval.

With regards to the process of pay raises, Pulou-Alaimalo explained to the committee that once the Budget Office (BO) approved a pay raise and provided funding, they would also submit a recommendation to the HR for a pay adjustment.

Definition of pay adjustment according to Pulou-Alaimalo’s explanation to the committee would be the revision of the pay scale or the change of duty, for example, a duty and responsibility added.

“We have a different role with the BO when it comes to the pay raise issue, they can say that money is available but when it comes to our office, you have to meet the merit system,” Pulou-Alaimalo explained to the committee.

“Now, you can be recommended for $30,000 for a salary, however, when it comes to our department, our “classification division” will review the law including your background and see whether you meet certain requirements for the position,” the HR director explained.

She further stated that the person would never be eligible for the pay raise if the HR classification division reviewed and discovered that you don’t meet the merit system.

“The bottom line of the process is that, if you don’t meet the merit system principle, it’s not going to be approved,” she said.

Faimealelei disagreed. He told the HR director that it’s his understanding that once the pay raise is approved by the Governor, that person must receive his/ her pay raise.

“Nothing was illegal in the whole process because the Governor had already signed it and approved it.

As a former cop for the Department of Public Safety (DPS), Rep. Fetu explained the “due process of law” where all government employees have rights.

Fetu asked the HR director if it was her recommendation to the Governor to have the roll back. Pulou-Alailima said she informed the governor that there were violations of the law done by leaders in the past year, especially during the period of the election campaign where so many people received huge pay raises and also conversion from contract to career service within the government.

Fetu shared his own personal opinion and said that the move by Gov. Lemanu P. S. Mauga and his Administration to roll back pay raises and conversion of contract to career services is unprofessionally and unfair.

“When Lolo was governor, Lemanu was working as the Lieutenant Governor. He was there when these pay raises and conversions were made so why is he trying to change it now?” Fetu asked, adding that the decision by the Lemanu & Talauega administration will not only affect the whole administration but also government employees.

The new director explained that the reason behind the roll back is because most of these pay increases and conversions were not done according with the law.

One of the issues she explained to the committee was the issue about “newly added duties and responsibility”.

Pulou-Alaimalo said that this is the same issue that the Fagatogo faipule questioned her about during her confirmation hearing last month, regarding the salary of the former HR director.

She said that before someone receives such a salary, the reclassification division will review and analyze the newly added duties and responsibility and see if this person meets the merit system principle to have such a salary.

A few reports were presented to the committee by the HR director. One report is the governor’s General Memorandum to “Freeze all pay increases and conversions of position from contract to career service.”

Lemanu stated in his January 8, 2021 memo that in order to control spending, there would be a freeze to all pay and conversions of positions from contract to career service.

The report also stated that all pay increases for career services employees granted since January 1, 2019 that increased an employee’s rate of pay above the amount that was budgeted by law for that employees position, are invalid.

For pay adjustment without justification in the budget, the reports says that “Employees who received such invalid raises shall have their pay reset to the amounts before their invalid pay adjustment were granted plus any amounts they were due pursuant to law,” the report says.

For pay adjustment classification, that pay adjustment of career service employees without justification violates the principles of equitable treatment of employees expressed in A.S.C.A  7.0201.

“All pay adjustments issued since Jan. 1, 2019 that were made by means other than reclassification, annual step increase, or special incentive awards as required by Title 7 of the A.S.C.A Title 4,” the report says.

As for conversion from contract to career status, they were made without opening the position to applicants through the competitive merit system.