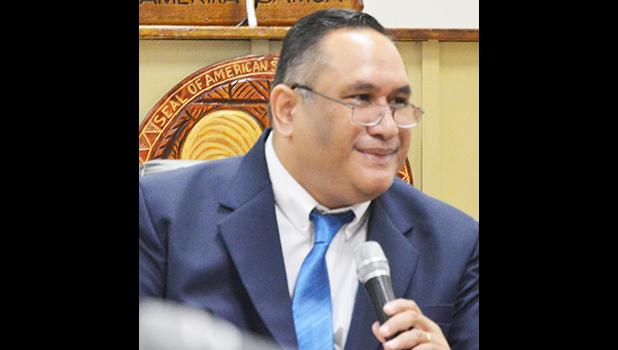 Pago Pago, AMERICAN SAMOA — Fainu’ulelei Falefatu Alailima Utu is now the new Attorney General for American Samoa after he was unanimously confirmed by the Fono last week. House of Representatives confirmed Fainu’ulelei by vote of 18-0 and he was endorsed by the Senate last Thursday in a unanimous vote — also 18-0.

Fainu’ulelei appeared before the House Legal Affairs/Judiciary Committee last week for his confirmation hearing, chaired by vice chairman, Rep. Vailoata E. Amituana’i. His family and staff were also present in the House chamber to show their support.

He informed committee members that he is honored to be appointed to the post and that he has been an attorney for 30 years. The Attorney General is also the director of the Department of Legal Affairs, which includes the AG’s office and the Immigration Office.

Vice Speaker Fetu Fetui Jr asked Fainu’ulelei if he holds any position in his church, to which Fainu’ulelei replied, yes, he holds the position of “Failauga Faamaoni” in the Methodist Church.

Fetu smiled and told Fainuulelei that he fully supports a person for attorney general if that person holds a position in the church. He then told the nominee that he would vote for him.

Vaifanuatele Representative Lavea Fatulegae’e P. Mauga informed Fainuulelei that during the two years he worked for the Immigration Office, he’d noticed a lot of young people working for the office. He wanted to know from the witness what his plan is for these young people — if he’s going to relocate them to other divisions under his office or not.

The issue of so many people employed at Immigration just before the election was one of the issues raised in the House chamber two weeks ago.

One representative wanted to know if these new employees working at Immigration are qualified for the job. He said that there were people who worked at a local construction company as janitors, but he was shocked when he went to the Immigration office to renew his cousin’s immigration identification and saw that they were the same people who served him at the front counter.

Fainuulelei responded that although it’s only been two weeks since his appointment to the new post he has already been informed about the issue. He further stated that there’s a lot of other tasks that these young people can be assigned to do, such as putting together the “scanning project” to help put together all the immigration files in one place.

Lavea said that is the reason why he asked this question — because he is curious if the new attorney general is going to make any changes to reduce the number of new employees at the Immigration Office.

Rep. Faimealelei Anthony Fu’e Allen requested the nominee to take a look at some old criminal cases involving the unlawful possession of drugs that have been in the office for many years now. He said that some of the people accused in these pending criminal cases are the same people that the administration is trying to bring in while the cases against them are still pending.

Two Manu’a Representatives expressed confidence in Fainuulelei’s abilities and praised his leadership noting the positive impact for ASG. Rep. Alumamalu Filoiali’i Ale said that any leader holding a spiritual position shows a true sign that God is leading the way.

Rep. Avagafono Vaimaga Maiava informed the committee that he has known Fainu’ulelei for many years as they used to work together, saying he’s an honest leader who complies with the law every time he performs his job.

He requested Fainuulelei to carefully consider the problem the Territorial Correctional Facility (TCF) is currently facing due to the numbers of foreigners who have already served their period of detention, but are unable to depart the territory due to the closure of borders between the two Samoas.

Avagafono, a former deputy commissioner said that his only concern with this issue is that our government is using taxpayer’s money to feed these people stuck in TCF unable to depart. He also stated that immigration laws is clear and sponsors need to be informed of their duty to people they bring into the territory.

The problem of too many foreigners coming into the territory was also raised during the hearing, and Avagafono reminded Fainuulelei that this issue is unstoppable, however, the law is clear. His only concern is the future of our young generation because these foreign people will take over our country in the future and our own people will suffer.

Representative from Swains Island, Rep. Su’a acknowledged Fainuulelei for addressing the House of Representative in the right form according to the Constitution, which includes the islands of Tutuila/ Manu’a/ Aunu’u/ Olohenga mamao.

Su’a was almost in tears when he thanked Fainuulelei for mentioning Olohenga in his speech when he addressed the committee. He reminded Fainuulelei the problem ASG is currently facing — the neglect of the islands and the people of Manu’a. He stated that the Manu’a islands have been left out of much development funding and he doesn’t want this problem to continue.

It was close to the ending of the hearing when Fetu sought Fainuulelei’s legal opinion regarding the matter that happened last year before the general election when the police commissioner at the time was publicly involved in election campaigning.

As a former cop for over 20 years, Fetu reminded Fainuulelei that his job as the attorney general is to make sure everyone complies with the law. He further stated that he doesn’t agree with the former police commissioner’s move when he left his post as the person who protects the safety of the people — to publicly involve himself in the election campaign.

Leasina Rep. Ape Mike Asifoa informed Fainuulelei that in the fourth quarter report, it appeared that most of the criminal cases the AG’s office filed in court involved drugs. He said that most drug cases filed in court involved immigrants and that’s a burden to ASG. He advised Fainuulelei to find a way to reduce the problem of drugs in the territory.

Fainuulele thanked the faipule for their words of advice and encouragement, which will give him confidence to fulfill his task. He further stated that after hearing their advice, it reminds him of his father who also served in the House of Representatives for many years and that his father had also served as the Speaker of the House.