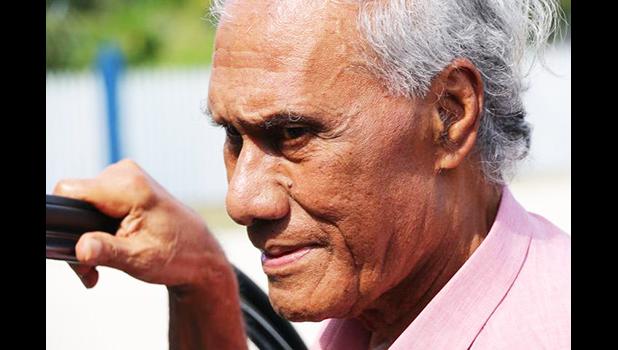 Pago Pago, AMERICAN SAMOA — Gov. Lolo Matalasi Moliga has joined leaders of the Pacific region in expressing condolences over the passing of Tonga’s Prime Minister, Samielu ‘Akilisi Pohiva, who died last Thursday at an Auckland hospital (Wednesday in American Samoa), at the age of 78.

The Tongan government in its Facebook page announced last week Wednesday (Tuesday local time) that Pohiva was being medivaced to New Zealand after he was admitted to Vaiola Hospital in Tonga two weeks earlier for pneumonia.

Pohiva, who served his second term as Prime Minister since January last year, had been diagnosed earlier this year with a liver complication and he successfully underwent a medical procedure at Mercy Hospital in Auckland, according to the Tongan government announcement.

“The sad and sorrowful news” of Pohiva’s passing “has certainly sent a shock wave throughout the Blue Pacific,” said Lolo in a statement last Friday.

“Although our political ideologies are different, we are all people of the Pacific, rich in cultural traditions, bound by similar needs, challenged by analogous impediments, embraced by the Pacific Ocean, and contiguous by our sense of community; tragic events involving the loss of one of our great leaders resonate vociferously throughout our Pacific Region and triggering a sense of loss,” the governor said.

Lolo said Pohiva’s “life journey depicted by his commitment to the advancement of democratic principles and championing the cause of the commoners, reflect values worthy of emulation, given our collective resolve to serve our respective peoples to the best of our abilities without prejudice relative to our respective station in life.”

On behalf of our government leaders, traditional leaders, Lt. Gov. Lemanu Peleti Mauga, and the people of American Samoa— inclusive of our Tongan community — I extend to his Majesty ‘Aho’eitu Tupou VI and the people Tonga our deepest condolences” over Pohiva’s passing, the governor said.

“It is certain that Honorable Pohiva will be sorely missed by the Tonga government , its people, and the Pacific region as well,” Lolo continued. “May he Rest in Peace and we pray that God will comfort his distraught and grief stricken family.”

The state funeral for the late Prime Minister of Tonga is to be held on Thursday, with an accompanying public holiday and national day of mourning.

Family services have already begun in Auckland with a public and official memorial service taking place at the Free Wesleyan Church of Tonga in Mangere on Sunday night.

Mr Pohiva will be repatriated to Tonga on Tuesday via a Royal New Zealand Air Force aircraft and will lie-in-state at the St George Building in Nuku'alofa as various church and community groups pay their respects.

The state funeral will then take place on Thursday at the Free Wesleyan Church of Tonga Centenary Church before Mr Pohiva's burial at the Telekava Cemetery in Kolomotu'a.