Former staffer reminisces on his years with Gov. Coleman 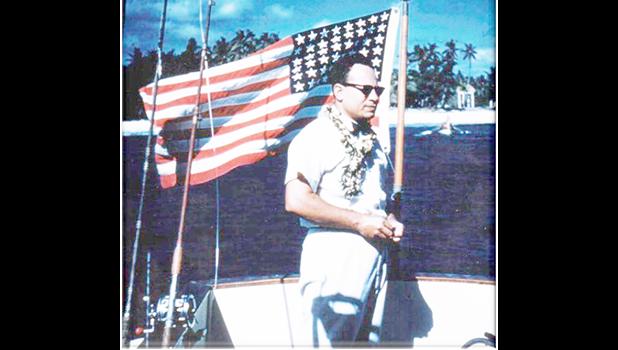 When I worked for Governor Peter Tali Coleman in American Samoa, he made the decision that he would visit all the villages on Tutuila and Manua to "show the flag" and it just so happened that on our scheduled trip to Vatia on the opposite side of the island — with no road connection then only a damp slick trail and the open sea, Prince Tungi of Tonga was at Government House for a short stay on one of his many stopovers so he delightfully joined the trip.

It was on the trip that I took the photo of Governor Coleman standing appropriately in front of the American flag flying on our boat as we neared shore.  I recall there was some discussion beforehand about how we would get the Prince ashore since Vatia did not have any semblance of a wharf and it would not have been proper for him to be asked to wade through the water getting ashore.

At that time Prince Tungi was his heftiest; in later years I understand he did lose some weight. I would be wrong to guess what exactly he weighed then in his prime, certainly in the multiple hundreds, but he carried himself quite well but as comparison I was a young Oklahoman and weighed less than 150. The Prince made four and a half of me and stood well over six feet tall at least.

He took after his mother Queen Salote, whom I saw only on two occasions in the ten years I lived in American Samoa.  She was certainly a stunning woman of dignity and regal impression and she caused quite a stir at Queen Elizabeth's coronation when she rode in an open carriage in the royal procession when it showered slightly and did not make a fuss about getting a bit wet since it rains in Tonga almost every day, as in American Samoa the same 300 inches a year.

The Governor sent me to the wharf in Fagatogo with his limousine, the best car on the island with the flag on the fenders, once to offer it to her during her stay at port on a brief stopover.

A Tongan accompanied me as I approached her and that fellow beside me fell to his knees as we neared her and a sudden stab of electricity as in the comics hit my being as to what I should do. I stood there and was shocked into some aspect of wisdom that if I fell to my knees as a non-Tongan I might look as disrespectful as if I kept standing.

This was in contrast to seeing many Western men don a lavalava the very day they arrived on the island — perhaps showing their acceptance of local custom a bit too soon — so I remained standing and spoke with respect. I remember Queen Salote must have noticed the sudden flash of decision on my face for she smiled at me.

So the disembarking at Vatia was no problem at all for Prince Tungi, coming from that bloodline.  He awaited his first turn at going ashore and two very husky Samoan young men waded out waist deep and picked him up as nimbly as they did me and carried him ashore without as much as getting a dangling wet foot.

I often wondered why they had not brought a long boat with several rowers to do the job boat to boat but theorized that it would be an act of greater respect as fellow Polynesians had the two men carried him to meet the waiting dignitaries from Vatia.

I shall never forget that experience so long ago or seeing the huge figure of a Crown Prince pulling his own small luggage bag on wheels through a teeming airport terminal speaking with a commanding voice.

There was one local statesider who had been on the island too long, a rather offensive fellow, who had a penchant for giving everyone a nickname of supposed humor, and his for Prince Tungi was "His Lardiy Majesty."  I wanted to correct him many times but decided not to give him any credit for his slur.

Prince Tungi was certainly able enough to ride a bicycle and I am pleased to have known him and have kept the image of him in my thinking for decades.  The statesider I seldom recall.

Read companion to this story — Coleman-Eisenhower Day event — elsewhere in this issue.