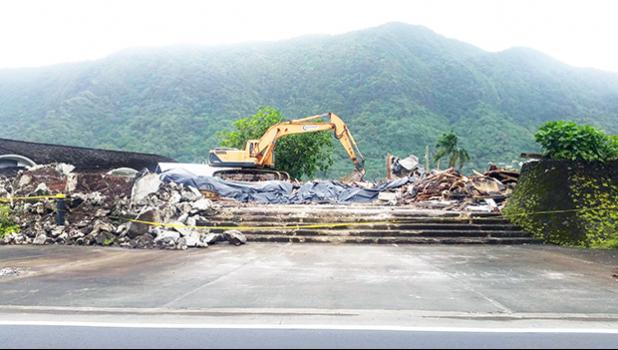 A look at what remains of the main Fono building. This past Saturday, crewmembers from Paramount Builders were in Fagatogo, demolishing what was once the meeting place of the territory's lawmakers, where bills were discussed and laws were passed.

The company was given the green light to take the building down, despite some current lawmakers wanting an elaborate ceremony, to include a prayer service and a small gathering.

Paramount Builders won the contract for the demolition job, and the Notice to Proceed (NTP) was issued last week. It took a few hours for the crew to demolish the main building.

Plans for a more modern structure to be built at the same site, are being drawn up by architect, Mark Lively, whose company also designed the new ASPA building in Tafuna, and the Centennial building in Utulei.

Concerns about asbestos at the site of the job have been laid to rest, as an independent contractor who specializes in asbestos removal gave the okay to take the building down.

Paramount Builders hauled the asbestos to a designated dumpsite and according to company officials, once they get the approval to demolish the House section of the compound, demolition will resume.

They are hopeful that everything will be squared away by this week.

Currently, the Senate conducts hearings inside the Fono's Samoan Guest fale, while the House of Representatives is utilizing the Gov. H. Rex Lee Auditorium (Fale Laumei) in Utulei.

A Paramount spokesperson said yesterday that work at the Fono can only be carried out during the weekends, because of Senate sessions being held within the vicinity during weekdays.